Falling Away has been a staple Dominant since it was introduced in Redemption’s 3rd set – Women. It was introduced to balance the newly printed New Jerusalem promo card. One let you rescue an extra Lost Soul, the other let you take a Redeemed Soul away.

From the beginning, Falling Away has been a staple card in almost every competitive deck. But it’s also one of the most theologically controversial cards in the game. There have been players who have refused to use it. I knew a guy who just called it “the theologically incorrect card”. 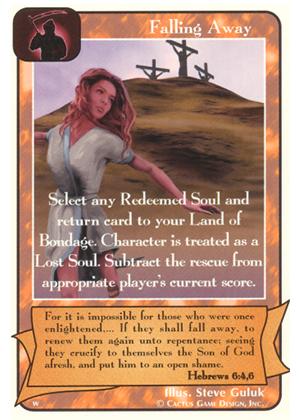 In game mechanics, the Land of Redemption represents heaven. When you rescue a Lost Soul, it becomes a Redeemed Soul in your Land of Redemption. What the original Falling Away essentially does is take a redeemed person out of heaven. I’m pretty familiar with the Bible, but I’m not aware of anything in scripture that says once people enter heaven that they can become lost again. In fact, I’m familiar with a few verses to the contrary, that indicate nothing can separate us from the one who has redeemed us!

“My Father, who has given them to Me, is greater than all; and no one is able to snatch them out of the Father’s hand.” John 10:29

“For I am convinced that neither death, nor life, nor angels, nor principalities, nor things present, nor things to come, nor powers, nor height, nor depth, nor any other created thing, will be able to separate us from the love of God, which is in Christ Jesus our Lord.” Romans 8:38-39

Maybe this is the reason that Guardian of Your Souls was printed. Or maybe it had to do with taking some of the power out of an evil Dominant. I wasn’t around at the time, but I imagine it was probably a combination of both. 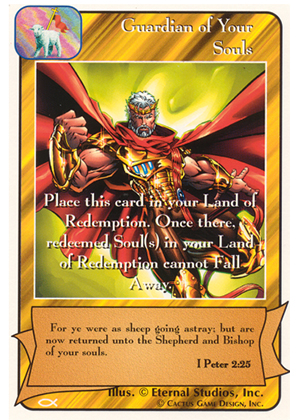 (For those unfamiliar with the Dominant cap, there used to be no limit to the number of Dominants a player could use in a deck. It was in 2012 that a change was made to limit Dominants to the same number of Lost Souls in a player’s deck.)

With Guardian suddenly out of the picture, Falling Away again became a staple card for most decks. And with the Women set being out of print, the card quickly jumped in price and became difficult for young players to acquire.

When we were deciding on promos to test along with the I/J starter decks, Falling Away made the list for a little while. We like to keep the price of cards in the game reasonable, especially the older cards. It’s one of the reasons that cards like Harvest Time, Chariot of Fire and King of Tyrus all saw reprints.

Looking ahead at our multi-year set plan, far off in the future we saw the idea to print a set based on the book of Hebrews. It can be hard to be patient, but we felt it was best to wait to reprint the Dominant in the future when it would be a sure fit.

Here we are, summer 2015, piecing together the foundation of what would become Cloud of Witnesses. We know we’re going to reprint Falling Away, but we also know that it’s a controversial card because of the theology surrounding it.

Similar to our desire for the reprinting of several of the cloud Heroes, we faced the challenge with this reprint. How can we make this card different than its predecessor, yet not strictly better or worse? We wanted players to have a legitimate choice between two very different versions of the card.

The original Falling Away is an almost sure fire way to subtract one Redeemed Soul from your opponent’s score. The reprint started out as simply a temporary convert ability for human Heroes. If used correctly that will often stop the rescue of one Lost Soul giving the same net result as its predecessor. As an added bonus, this new version of the card can get around Lampstand, the most commonly played counter to the original Falling Away. 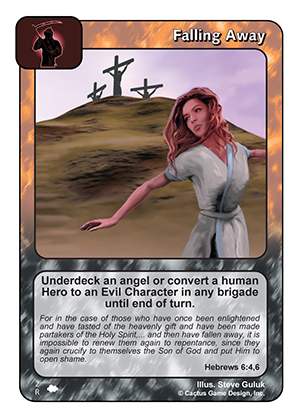 During our testing the new Falling Away was strong, but it paled in comparison to the original version. If it was a completely different Dominant, it would have been fine. But it didn’t offer enough reason to choose the new version over the old one. One of the weaknesses we noticed was in dealing with angels.

That’s when someone suggested that we allow it to target an angel was well, but not for conversion this time. Instead, we decided to send the angel to the location where “fallen” angels go – to the bottom of the deck. Gates of Hell anyone?

That proved to give the card enough of a boost, that if you time it well, it can get you a block (essentially -1 Redeemed Soul) against pretty much any offense. It still has its advantages and disadvantages over the prior version. But it presents players with a solid choice. As a rare card in a new set, it should also be more accessible to younger players.

One of the things I really like about the new Falling Away vs the old one is that it promotes strategy with the use of Dominants. There are a number of clever ways you can use it to create a -1 Redeemed Soul situation, and potentially do even more damage to a player than just costing them a soul. Here are some ways we expect the new Falling Away to be used:

One of my favorite Falling Away “blocks” came during a time when part of the special ability on the dual-affiliation Joab said “protect David from harm”. When my opponent rescued with Joab, I converted my David and blocked with him. Since Joab protected him it created stalemate that was hard for Joab to win. It gave me initiative to Warning Against Rebellion and Haman’s Plot against my opponent’s defense, setting me up for multiple easy rescues.

I’m sure players will think of many other clever ways to use the new Falling Away. Probably even some that we didn’t discover during testing. I’m glad to see this old staple return in a way that’s accessible to new players, but gives veterans and fans a choice between the original version and the new one.

3 thoughts on “Falling Away”