Jesus Christ was born of a virgin, lived a sinless life perfectly pleasing to God, offered himself as the sacrificial lamb to pay for the sins of mankind leading to his death on the cross, rose to life on the third day, was seen by hundreds of people and then ascended to heaven to sit at the right hand of God constantly interceding for the saints. That’s an extremely impressive resume! But that’s not all. The scriptures also promise us that he’s coming back!

How do you represent the second coming of Christ in the game of Redemption? If the Son of God card represents Jesus, then a way to get back Son of God seems like the most obvious choice. But with a card like the New Jerusalem Dominant already a staple in most decks, getting back the Son of God is simply too powerful. 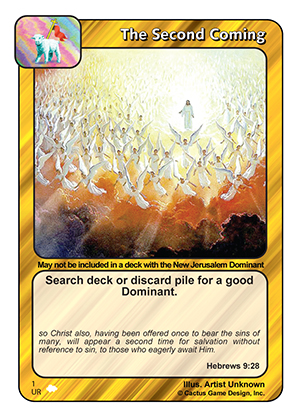 Unlike the Falling Away reprint in Cloud of Witnesses, The Second Coming is not the same unique card as the New Jerusalem Dominant. However, due to the identifier players must choose between the two when selecting Dominants for their deck.

Interaction with Son of God

The obvious play with The Second Coming is to get Son of God back and use it again. That essentially makes it equal to New Jerusalem. But the application hardly ends there.

Unlike New Jerusalem, you don’t have to wait to draw both cards at the same time. With all the cards that can target Dominants in your hand, that can be a real bonus! And in the event that you’ve reached 4 Redeemed Souls (in a T1 game), if you’re holding The Second Coming you can play it to go get your Son of God to win the game! Can New Jerusalem do that? I didn’t think so!

If we only focus on the interaction with Son of God we sell The Second Coming short. Remember, it can search the deck or discard pile for any good Dominant! There will be plenty of times when using Angel of the Lord twice will benefit a player more than using Son of God twice. Removing two blockers can lead to easier rescues later in the game, possibly even rescues that go unblocked.

Grapes of Wrath is an amazing utility Dominant. It has multiple applications on both offense and defense. In multi-player it’s even better. The opportunity to use Grapes multiple times can easily cause a difference of one or more Lost Soul cards over the course of a game.

There are decks that rely on Glory of the Lord and The Holy Spirit that reside in the territory. While there aren’t a lot of ways to discard them, if your opponent does manage to do it you might need to get it back.

It’s Not All Flowers and Sunshine

There are a lot of amazing benefits to playing The Second Coming over New Jerusalem. I’d even say that the pros outweigh the cons. But it’s always necessary to count the cost.

If your opponent is using cards that limit your ability to search, like Hezekiah’s Signet Ring, you’re essentially unable to get any benefit from The Second Coming.

Once played, your Dominants are vulnerable to cards that can remove things in the discard pile from the game. As recursion becomes more common, so does discard pile removal.

During one of our play test games I drew Angel of the Lord and Son of God early in the game. Rather than having either clog my hand I played them fairly promptly. Before I drew The Second Coming Justin removed my discard pile from the game! At the end of the game when The Second Coming finally made an appearance I had nothing to get with it!

As one of the ultra rare chase cards in Cloud of Witnesses, how do you think this card will shape the metagame? How long before enough people have The Second Coming for that to happen? Will people begin using discard pile removal in their decks for the opportunity to rob an opponent of crucial Dominants? Will Hezekiah’s Signet Ring be everywhere?

While the answers to those questions may vary from region to region or even play group to play group, one thing is for certain – The Second Coming will change the way the game is played!

Join us next week as we take a deeper look into Cloud of Witnesses!