In the last couple of years, gray has seen extensive use as a defensive brigade and the results have been impressive. In 2013, a Roman-based hand control deck won T1 2P at Nationals. That same year, a pair of decks using Pharisee-based defenses (along with a couple Romans) won TEAMS at Nationals. The following year at Nationals, the top three decks for T1 2P used gray defenses (first place being mostly Pharisees while second and third used a Pharisee/Roman mix). A deck with a Pharisee defense also won T2 MP in 2014 proving that it’s not just a T1 defense. Last year saw gray take a bit of a step back as the top gray deck “only” got third place in T1 2P, but it’s pretty clear that a gray defense—in some combination of Pharisees and Romans—is one of the dominant defenses right now.

With all that being said, I’d like to take a look at the “other” gray defense—Syrians. In the months leading up to the summer of 2014, I began using a red/gray deck in T1. However, my deck was based on Syrians and not the popular Pharisees and Romans that everyone else was using. I was drawn to a couple of Syrian Evil Characters that often get overlooked because of the many powerful characters that gray has.

Naaman is a straight up boss, and he works amazing when you’re using a red offense. King Ben-Hadad might be one of the most overlooked Evil Characters in the game. His ability to look at opponent’s hand and underdeck any card (if he successfully blocks) will more times than not let you know exactly how to attack next turn. I like blocking with him from hand and then using capture Artifacts such as Unholy Writ and Magic Charms—my opponent may think they are just sacrificing a Hero in order to force me to use those Artifacts, but Ben-Hadad lets me do even more damage.

Speaking of Magic Charms, Syrians have Laban to hold it (though I typically ran another gray magician such as Elymas Bar-Jesus in case Laban was lost before I could use Magic Charms). Syrians also have Syrian Archer, King Cushan-Rishathaim, and the powerful Antiochus IV Epiphanes (though he’s more common in Greek defenses). House of Rimmon is a decent protection Fortress as it protects from a player’s own abilities as well. After the release of the Early Church set, Syrians got a boost with the new Damascus Site that helps them set up faster or come back later in the game not to mention the ability to hold Rain Becomes Dust while you have a Syrian in play.

Even with all this, Syrians still tend to come in third within the pecking order of Gray. Let’s take a look at what they don’t have and how the new set will address those shortfalls… 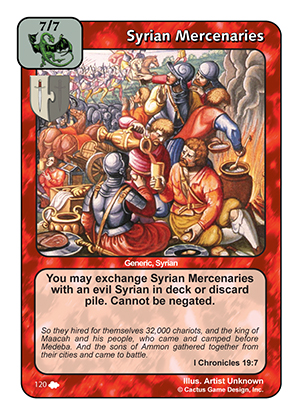 Other than Namaan’s Chariot and Horses, Syrians do not have much speed. Damascus was a definite help, but it does force you to put the character in play where the opponent can target it or plan his attack based on what you get. With the release of Cloud of Witnesses, a Syrian defense will now have Syrian Mercenaries. With the ability to exchange with any evil Syrian in your deck or discard pile, these guys will allow you to get just the right character to block your opponent’s attack whether you want Naaman for a FBTN battle or Syrian Archer for some banding. 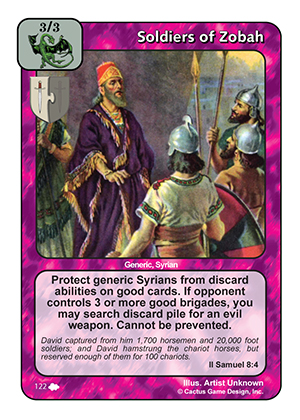 Another thing that Syrians don’t have is a small “initiative” blocker. Syrian Archer comes closest, but even his 3/5 will give up initiative to a 4/4 Hero. Soldiers of Zobah are the answer for this problem. Not only do they protect themselves from discard abilities on good cards, they can recur an evil weapon if your opponent controls 3 or more good brigades (in case you hadn’t noticed already, that’s going to happen a lot). The most obvious choice is likely to be Gold Shield since that ends up in the discard pile after being used, but Roman Spear is a great fit in a red/gray deck as well. I could even see Dart being used as the Soldiers of Zobah can recur it, play it to take out a non-attacking Hero and not surrender initiative in the process.

Another thing that Syrians lack is reliable banding when you think your opponent might be holding Angel of the Lord or a “cannot be negated” battle winner that takes out one Evil Character. Up until now, Syrian Archer had to be around to ensure you had a banding option, but now Syrians have something even better.

As first shown on the Redemption CCG Facebook page, The Syrian Reinforcements give the player an “add to battle” option for when their first blocker has been removed. One of the things that makes a demon defense so strong is the “last resort” option of Gates of Hell to add a demon to the battle. Well, The Syrian Reinforcements can be used as long as you keep them around—however, keep in mind they do need to be triggered by your opponent removing your Syrian blocker so in that sense, they are not quite as strong as Gates of Hell.

Lastly, Syrians do have a lot of strong capture-related cards such as The Strong Force, King Rezin, Night Raid, and Syrian Victory so they work great with Raiders’ Camp. However, they don’t have a way to reliably get Raiders’ Camp out quickly…until now. 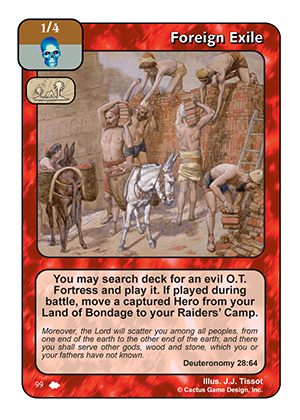 With these four additions, Syrians will most definitely see more play and perhaps begin to challenge Pharisees and Romans for “best gray theme.” Be sure to check back soon for more Cloud of Witnesses previews here on Land of Redemption!