That can actually be said of a few themes. So when we sat down to flesh out the defenses in Cloud of Witnesses we knew that there were some long neglected civilizations that we wanted to show some love this year. Three of them in particular.

The O.T. brown theme of rebellious Israelites had not received much of significance for quite some time. Justin did a wonderful job of covering the King Saul related cards in The Fall of Saul: Part 1 and Part 2. Travis also dropped several of the brown cards on us in Two Testaments are Better Than One: Part 1 and Part 2. In case you missed it I also dropped a couple spoilers on the Cactus Game Design message boards yesterday – Thorns and Thistles and Joab.

When looking at what brown needed to be competitive again, one of the things we realized is that it is probably the slowest defense in terms of set up and acceleration. The new version of Michal helps with that as does the draw 1 from King Saul. The other character that we gave an ability to help set things up is Shimei. 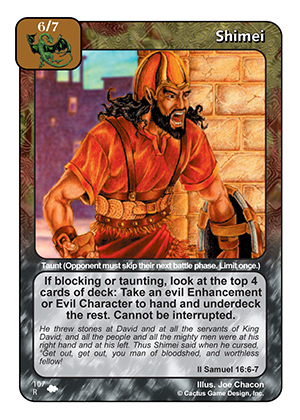 Shimei had that sweet taunt ability (without limitation) on our initial list, but his special ability was “Shimei’s Malicious Curse cannot be negated”. Thematic, yes. Exciting? Not really. But with a taunt ability that can take away a player’s battle phase who cares?!

Apparently we do. Changing Shimei over to a mini-Divination style ability keeps the defense coming, which is what we felt brown really needed. Being able to do that on a taunt made it especially good!

What am I doing talking about Shimei? I thought this article was supposed to be about the new Egyptians…

There were a number of Egyptians who opposed cloud Heroes. The first we will look at today is a Pharaoh who seems to be more of a victim than an antagonist.

Abraham and Sarah went to Egypt due to a famine in the land. But instead of being forthright, Abraham chose to deceive Pharaoh under the assumption that he would be put to death. Sarah was taken to Pharaoh to become his wife. But when God struck Pharaoh’s household with plagues he summoned Abraham, called him out on his lie and sent Abraham and Sarah away.

The resulting card gives us an initiative Pharaoh with a very thematic ability. 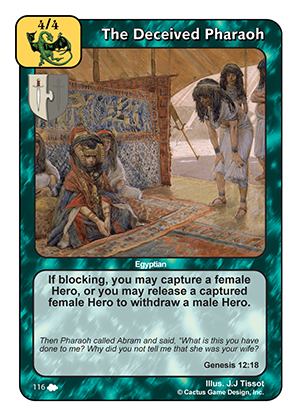 Through a good portion of our testing we had a reprint of the Patriarch’s card The gods of Egypt, only as a half orange, half gold Evil Character. He had a solid ability, solid stats and proved to be a really nice card for an Egyptian defense. But then we got into a conversation about whether or not we should print false gods or characters that represent idols.

Through Rob’s wisdom and guidance, we looked to Psalm 115. Here we find that scriptures say false gods are essentially nothing – just inanimate object. It seems weird to have an inanimate object block a rescue attempt, so we opted to make a change. The result is a very similar ability and stats on a card that is probably overdue for a solid reprint. 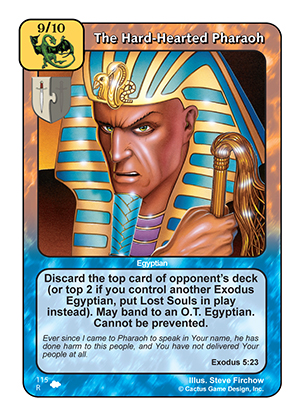 This is the guy who had to endure 10 miraculous plagues before he was willing to let God’s people go free. Instead of allowing the Israelites to go worship the one true God in the wilderness, he called them lazy and took away the straw that they needed to make bricks for him. 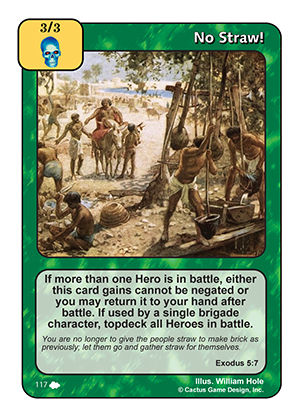 This new Scattered variant presents the user with an interesting choice. Do you think your opponent can interrupt or negate “No Straw!”? Then you can choose to have it be “cannot be negated”. But if you think the opposing player doesn’t have the means to interrupt or negate, send “No Straw!” back to your hand to repeat the process again next turn!

Eventually Pharaoh got tired of seeing Aaron, Moses, and another set of plagues. He evicted them from his sight under the threat that if they ever show their face again he will have them executed! 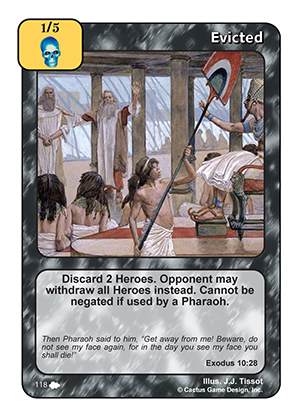 With two strong Enhancements already in the set pertaining to the story of The Hard-Hearted Pharaoh, it only made sense to give him a reprint with the power level a Bible character of his notoriety deserves.

Brown and Gold are only two of the existing themes we wanted to give a boost in Cloud of Witnesses. Check back tomorrow as Justin tells us about the new Syrian cards!