So when we left off in Part 1, King Saul was chasing David throughout Israel and the surrounding nations in a desperate attempt to keep the kingship of Israel in his family line. However, time and again David was one step ahead of Saul. Before word of King Saul’s mission had spread very far, David went to the city of Nob. While there, he lied to Ahimelech the priest about why he was there in order to get food and supplies. 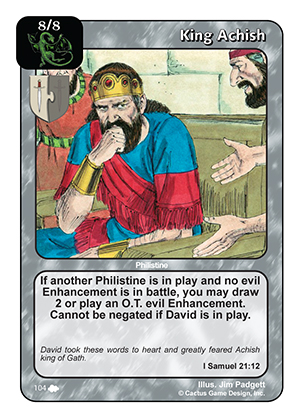 Before we continue with Saul and David, I’ll share a bit about King Achish. Early in the playtest process, King Achish had a paralyze ability that allowed the player to withdraw and paralyze a warrior class Hero in order to represent the fear that David had for King Achish. After several rounds of testing however, it was decided that Philistines didn’t need another withdraw evil character (Goliath does that pretty well already), but they could use some draw capabilities to make them a more playable defense. King Achish now gives the player the option of drawing or playing first (as long as he is not already holding a weapon) and his ability cannot be negated if David is in play thus giving a player incentive to build a “David and Goliath” deck.

While David visited Ahimelech at Nob, one of King Saul’s men was also there. Doeg was King Saul’s head shepherd and when he reported back to King Saul, he told how Ahimelech had assisted David with food and supplies. King Saul sent for Ahimelech and accused him of conspiring with David. Because David had lied, Ahimelech had no idea that David was a wanted man, but King Saul would not believe him. He ordered his guards to kill Ahimelech and his family, but the guards would not harm the priest.

King Saul turned to Doeg and ordered him to kill the priest, and Doeg slaughtered them all. The Bible tells us that Doeg killed 85 men who “wore the linen ephod” as well as the entire city of Nob—men, women and children. Doeg’s slaughter nearly wiped out the entire house of Ithamar, son of Aaron, but one priest escaped—Abiathar. He managed to get away and eventually found David to tell him the tragic news. David took Abiathar into his company and promised him safety. 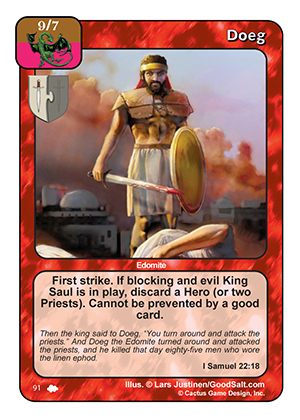 Doeg was not in the original set list. After we learned that we would be able to do new promos this year, I began to look for Evil Characters that needed a reprint. Since promos don’t necessarily need to relate to the set they are being released with, it gives us an opportunity to help a theme that isn’t getting much with the newest set. However, when looking through the unlimited set, I stumbled across Doeg and the fact that he’s an Edomite made me give him a closer look. As I re-read his story from I Samuel, he seemed like he would fit right in as a card in the set. However, he’s not a very well-known character and I thought it would make more sense to make a better known character as one of the promos, so I made the suggestion to move Esau, the Hunter to the promo list and replace him in the set list with Doeg.

As Saul’s lackey and someone who opposed David, Doeg fit right into the kind of Evil Character we wanted for Cloud of Witnesses. His ability is straight from the story—if evil King Saul is around, Doeg is going to be discarding some Heroes—especially priests. However, it should also be noted that Doeg can take out evil priests as well (he didn’t discriminate when he slaughtered the city of Nob). I bet you can think of a certain Greek evil priest that tends to make life difficult when your opponent puts him in play…

Now King Saul continued to pursue David, but David fled again to the land of the Philistines where he knew that Saul would not venture. By this time, it was well known that David was an exile in Israel so the Philistines took him into their company and King Achish granted David land for him and his band of warriors. David and his warriors raided enemies of the Philistines and won many battles for King Achish. However, the time came when King Achish decided to attack Israel. He gathered his forces, including David and his men, and marched against Israel. King Saul was terrified and he desperately sought the Lord’s wisdom in how to proceed. However, King Saul no longer found favor in the eyes of the Lord and he received no divine guidance.

Desperate for help, King Saul sought out a medium in the town of Endor and asked her to bring up the spirit of Samuel. The Medium in Endor did so, disturbing Samuel’s spirit, and then cried out in fear as she realized the man before her was King Saul who earlier in his reign had outlawed all practices of sorcery and witchcraft. The spirit of Samuel spoke to Saul and told him that his kingdom was being given to David, and that Saul would fall in the upcoming battle with the Philistines. 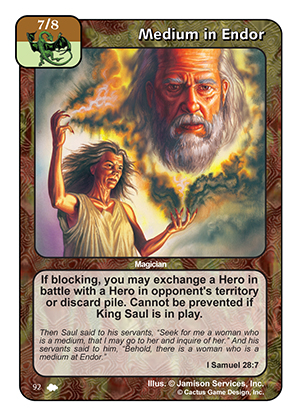 Medium in Endor is a new variation of the old Witch of Endor card. It allows the player to exchange an attacking Hero with a Hero in opponent’s territory or discard pile—representative of the way she brought Samuel’s spirit back from beyond the grave. Like Doeg, she also fits well into a King Saul deck as her ability gains cannot be prevented status if King Saul is in play.

As Samuel’s spirit prophesied, King Saul did fall in the battle with the Philistines, and the Philistines once again defeated the Israelites. However, it was all part of God’s plan to establish the throne of David. Shortly after Saul’s death, David would make the final transition in his life—going from a shepherd boy to a musician to a warrior to a mercenary to finally a King.

Thanks for reading and be sure to check back tomorrow for more Cloud of Witnesses previews here on Land of Redemption!