It was a tenuous time in Israel. Samuel the prophet was getting old and his time for leading Israel was coming to an end. Unfortunately, Samuel’s sons, Joel and Abijah did not walk in the ways of their father and instead used their position for dishonest gain. The elders of Israel made a decision—they wanted a king like the other nations around them. Samuel was not pleased about this and sought after God about the people’s request.

God told Samuel to warn the people about what would happen if a king was appointed over them, but that it was ultimately their decision. Samuel tried to dissuade the people from being like the nations surrounding them, but they would not be persuaded—“Give us a king!” they cried, and so the LORD spoke to Samuel and said that He would grant their request. Samuel followed the direction of the LORD and anointed Saul to be the first king of Israel. 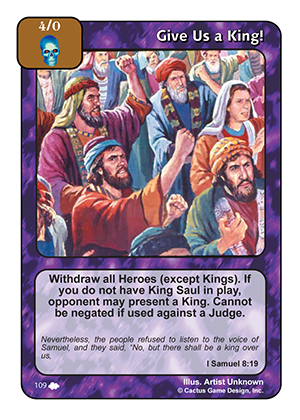 Give Us a King! is a new Enhancement that tells this story within its ability. First it withdraws all Heroes in battle (the people no longer wanted Judges over them). Next it allows the opponent to present a king if you do not have King Saul in play (since he was the first king). Lastly, it gains the “cannot be negated” modifier if it is played against a Judge because the judges would no longer lead Israel as they had done for so long.

So now Israel had the leader they wanted, and initially things went well for King Saul. Early in his kingship, the Spirit of God came upon him in power when he learned that one of the cities of Israel was under attack and had been threatened with subjugation by the Ammonites. King Saul led an army of over 300 thousand men and routed the Ammonites to rescue the city of Jabesh. With Samuel guiding him, King Saul was blessed.

The blessing would not last however. During an encounter with the Philistines, King Saul impatiently offered a sacrifice to God. While this might seem like a good thing to do, it was not his place as Samuel was still the spiritual leader of the people. Samuel rebuked Saul and thus began the beginning of the end of King Saul’s reign. Because of several poor decisions that King Saul made, the LORD rejected him as king and Samuel prophesied that his family would not continue as the leaders of Israel.

In previous Redemption sets (Warriors and Kings) we have seen two versions of King Saul—one good and one evil. In Cloud of Witnesses we now have the good and evil in one card. Like King Abijam, the player may choose to use King Saul as a good king or an evil king. If he is a lone blocker, he may toss the first Enhancement he plays—something we’ll get to later. Since he was the first king of Israel, he gets to draw 1 or you can choose to band to a I Samuel character of matching brigade. Whether he was acting well or poorly, we often see King Saul relying on others for guidance or to do his dirty work.

As King Saul’s downfall continued, we begin to see in I Samuel about the rise of David. His defeat of Goliath led to him becoming a leader of King Saul’s army and Israel enjoyed some great victories over their enemies because of the blessing upon David. David even married one of Saul’s daughters, Michal, as a reward for his triumphs over the enemies of Israel. Meanwhile an Evil Spirit had begun to torment King Saul and seeing the popularity of David led to King Saul’s jealousy. However, not only was David a leader of King Saul’s army, but David’s music would help to drive away the evil spirit.

The sound of David’s Harp would soothe Saul’s mind, but as it became more and more apparent that God was taking the leadership of Israel away from Saul, the pressure became too much and in an act of desperation King Saul tried to kill David by throwing his spear in an effort to pin David to the wall of the palace. David escaped but seeing no other way to secure his kingdom, King Saul pursued David throughout Israel and the surrounding nations in an effort to kill him. 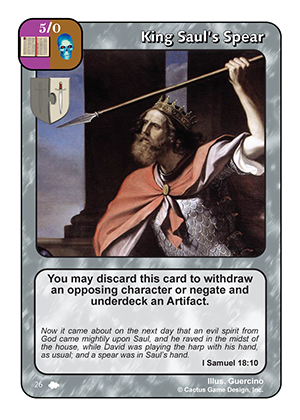 King Saul’s Spear is a new version of Saul’s Javelin. It allows you to discard it to withdraw an opposing character or to negate and underdeck an Artifact—this represents how it forced David to flee (along with his harp) when Saul could no longer contain his rage towards David. Having stats of 5/0, we also see how King Saul’s Spear becomes very potent when played on King Saul as an evil weapon because he can toss it immediately upon blocking. This can help King Saul defeat a smaller Hero who might otherwise get initiative against him.

Check back soon as we continue the story of Saul and how his pursuit of David turned out to be a deadly mission for many innocent bystanders. In doing so, we’ll learn of another powerful Evil Character who becomes a major threat to a particular group of Heroes.