Here at Land of Redemption we do not condone animal cruelty. I do not believe that God does either. Yet, in the Bible we have a story about a Hero who did some questionable things to animals in an effort to get revenge on his enemies. The result gives us a card like we’ve never seen before!

But I’m getting ahead of myself. To appreciate where we are today, we must first look at where we’ve come from. The game’s first dual alignment card, Philosophy, has been around for years. It wasn’t until the release of the 2011 tins that dual alignment Enhancements became more wide spread.

So what is the natural next progression in dual alignment cards? What’s the perfect bridge between a week of previews focused on good Enhancements to a week focused on previews of the evil themes in Cloud of Witnesses? 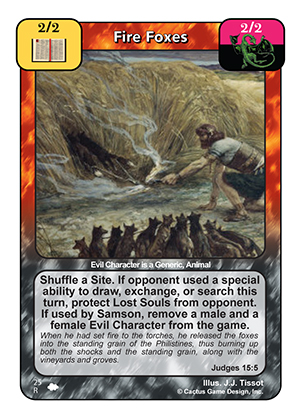 Samson was having girl problems. His new wife was given to another man by her father. So he did what any reasonable person would do: he caught 300 foxes and tied them together in pairs by the tail with a flaming torch at the end! He set them loose in the Philistine’s fields which were ripe for harvest. This equates naturally to the ability to shuffle a Site.

In Cloud of Witnesses we wanted to include counters to popular, powerful cards like The Angel Under the Oak. If your opponent uses certain ability types this card gets a bonus that’s much easier to obtain on the Evil Character side, but still a situational possibility if used as a good Enhancement. While these foxes may have helped Samson exact his revenge, nobody was rescued during this event. But this portion of the card ability is less thematic and more for game play purposes.

As a result of Samson’s actions, both his former wife and her father were burned by the Philistine lords. By his reaction (Judges 15:7) we know this was not the result he intended. When attempting to tie this card closer to Samson himself, we decided that we’d give it a powerful ability if you can get initiative to play it on Samson.

The great thing about dual alignment cards is that they provide versatility. The drawback is that you need to play specific brigades on both offense and defense to take full advantage of that versatility. Fire Foxes is the first of its kind, but I’m sure we will see more dual alignment character/enhancement cards in the future when they are appropriate.