Like several other good brigades, teal has not gotten many new cards in the most recent sets. There have been some good Heroes for specific themes (Crispus for a Corinth deck, Faithful Priest for a Jerusalem deck and Eleazar, Son of Aaron for a Tabernacle Priests deck), but not a whole lot besides those. While Cloud of Witnesses is likewise not going to introduce a huge boost for teal, it is going to give us two really strong teal Heroes. The best part is that these two teal Heroes will fit perfectly in ANY teal deck.

The first we’ve already seen—Melchizedek was previewed in Gabe’s opening article that talked about the new set (read that here if you haven’t already). While only time will tell just how popular he becomes, Melchizedek fits perfectly into a purple royalty deck, any teal deck and of course a deck based on cloud Heroes. Because of his great protection ability and his ability to generate Lost Souls for rescue he should prove to be extremely versatile as a territory class Hero who doesn’t need to attack to use his abilities. Having a lot of good brigades in play does have some drawbacks with cards like the Punisher Lost Soul and Emperor Vitellius, but I believe people will find Melchizedek’s abilities to be well worth the cost.

The other new Priest will likewise be able to fit into any teal deck but for a much different reason. 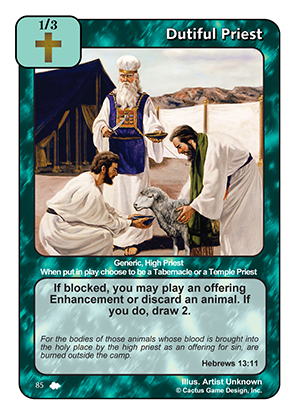 Dutiful Priest allows the player to choose him to be a Tabernacle Priest or a Priest from any of the Israelite Temples, which would include Solomon’s Temple, Zerubbabel’s Temple and Herod’s Temple. Currently there aren’t any benefits for being a Herod’s Temple Priest, but those who have been around the Redemption block will recall just how powerful the Zerubbabel’s Temple deck was when it first debuted, and Dutiful Priest would slide ever so nicely next to the Z-Temple’s Priests with his ability to play an offering Enhancement—perhaps one recurred by Joiada, Son of Eliashib.

Tabernacle Priests often took a backseat to the Solomon’s Temple and Z-Temple’s Priests until Eleazar, Son of Aaron provided a much needed boost in the Persecuted Church set. Throwing Dutiful Priest in the mix with Phinehas, son of Eleazar, Ahimaaz, Eli the Priest and Abiathar will give a Tabernacle themed deck another strong Hero with great initiative stats as well as some potential speed if you build your deck with a couple animals. If you’re really sneaky you might fit in a couple of the green/teal Priests and find room for Provisions…hmm… 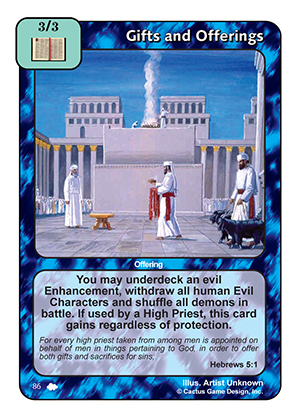 Wow, this card handles everything! When you think about it, your opponent pretty much has to block with a human or demon (since blocking Dutiful Priest with an animal just isn’t that smart) so Gifts and Offerings will pretty much be your best option. You might even get to take out an opponent’s evil Enhancement that’s been hindering you as well as winning the battle. On top of all that, it gains regardless of protection when used by a High Priest, and guess who just so happens to be a High Priest? If you’re not seeing it, scroll up and start reading from the top…

When teal was first introduced in the Priests set, it included many strong battle winners. Zeal for the Lord, Trumpet Blast, Burning Incense and Holy Unto the Lord were all very effective at winning battles. Since then however, teal hasn’t really gotten any support so it ends up being just that—a support brigade. However, with the versatility of Gifts and Offerings and the flexibility of Dutiful Priest, I believe it’s very likely that teal once again becomes a very strong deck choice. While it might not have the outright speed of Judges or all the options that clay offers, teal does offer the best access to one of the strongest Artifacts in the game, Urim and Thummim, and the advantage that can bring combined with another strong Hero and battle winner should once again make teal a contender.

Thanks for checking out these two awesome new teal cards and check back tomorrow for more previews from Cloud of Witnesses!