If you have not read the first part of this article, go back now and read it. Once you have done that, come back and you will be up to speed where we are headed with the final four of the Dual Testament cards in the Cloud of Witnesses set.

CARD NAME: Today
CARD TYPE: Dual Alignment Enhancement
CLASS: Territory
IDENTIFIERS:
STATS:
BRIGADE COLOR: Purple / Brown
SPECIAL ABILITY: Return all cards from set aside area to play. Discard all neutral and evil cards and shuffle all good cards into draw pile.
SCRIPTURE: He again fixes a certain day, “Today,” saying through David after so long a time just as has been said before,
“Today if you hear His voice, Do not harden your hearts.” (Hebrews 4:7 / Psalm 95:7-8)

EXPLANATION: This card began as a way to mess with Set Aside cards. The end result essentially carries out the same function with a more straightforward ability. With “Today”, players have another option when it comes to dealing with pesky cards in Set Aside that seem to just sit there and mock you sometimes. 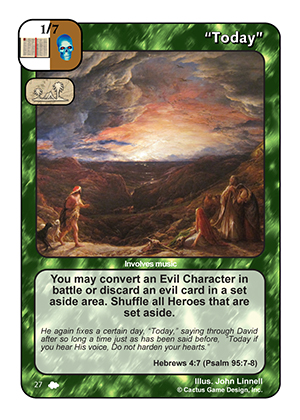 CARD NAME: Lead by the Hand
CARD TYPE: Enhancement
CLASS:
IDENTIFIERS:
STATS:
BRIGADE COLOR: White
SPECIAL ABILITY: Place in your territory: While this card is in play, all players play with their hands revealed except when cards are to be chosen from the hand at random. Mayhem may not be played. Cannot be negated.
SCRIPTURE: Not like the covenant which I made with their fathers On the day when I took them by the hand To lead them out of the land of Egypt; For they did not continue in My covenant, And I did not care for them, says the Lord. (Hebrews 8:9 / Exodus 19:5)

EXPLANATION: So with this card, the only thing that remained was the scripture reference. The card that resulted however is one of beauty. Broken Covenant is a fantastic card for several reasons. It is versatile in that it can be used in any deck because it is a curse. It gives you yet another option when trying to get rid of the ever increasing barrage of placed Enhancements that seem to be cluttering up your opponents’ territory. Finally, when all else fails, you can just draw cards, and who doesn’t want to do that? 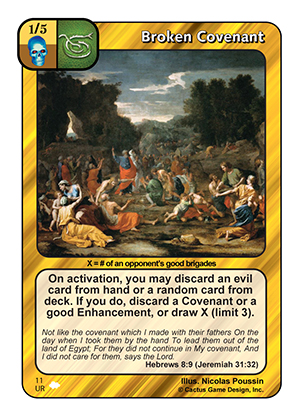 CARD NAME: Sins Forgotten
CARD TYPE: Enhancement
CLASS: Territory
IDENTIFIERS:
STATS:
BRIGADE COLOR: Teal
SPECIAL ABILITY: Remove all placed evil cards in play and set-aside from the game.
SCRIPTURE: “For I will be merciful to their iniquities, And I will remember their sins no more.” (Hebrews 8:12 / Jeremiah 31:34)

EXPLANATION: I envisioned this card being a buff for the teal brigade since the sins being forgotten sounded like something the priests would be involved in with sacrifices. What I failed to notice was the Jeremiah reference and the “I will” part of the verse indicating that it was a prophecy, thus the green brigade now on the card. In reality , Jeremiah needed some card anyway. I also learned a valuable lesson about writing abilities in that when you use the word “all”, very often that will be changed. 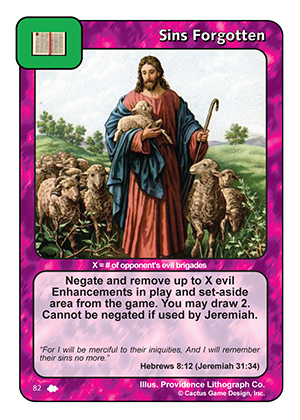 CARD NAME: Stoned
CARD TYPE: Evil Enhancement
CLASS:
IDENTIFIERS:
STATS: 3/7
BRIGADE COLOR: Brown / Black / Gray
SPECIAL ABILITY: Interrupt the battle. Reveal and set aside cards from the top of draw pile till 3 Evil Enhancements are revealed. You may Toss any of those Evil Enhancements from set aside this battle. After battle, place remaining revealed cards underdeck.
SCRIPTURE: For they could not bear the command, “If even a beast touches the mountain, it will be stoned.” (Hebrews 12:20 / Exodus 19:13)

EXPLANATION: This is probably my favorite card thematically speaking. I love the idea of digging for evil cards that you can then fling at the opposing Hero. Obviously my original name for the card is laying on the cutting room floor, opting for a more family friendly and less easily misconstrued wording. The way the card works is exactly what I was looking for however and look forward to including this in my defenses this upcoming tournament season. 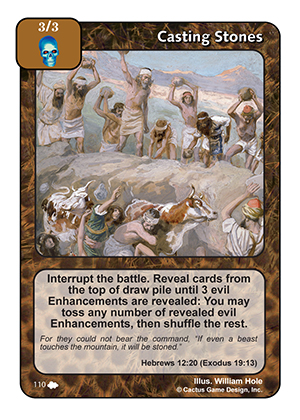 So why did I share all of this with you? First of all, I love to see behind the curtain into the process that goes into making anything. I figured that I was not the only one who liked that so hopefully the little bit of background helped you appreciate the process more. Secondly, when and if any of you get a chance to make your own card, you will understand that some cards are more easily translated into actual game play than others. Don’t get frustrated, but enjoy the process. For now, keep coming up with ideas and putting them on the boards. You have no idea how often cards that are printed start with ideas posted on the message boards.