When I heard that our set this year was going to be based on Hebrews, my eyes lit up. Not only do I really love Hebrews as a book, but I really love when a New Testament writer harkens back to and quotes from an Old Testament text. And since Dual Testament cards are already a thing since The Early Church set gave us the Covenant card, Scroll of Isaiah, the precedent had been set. I opened up my Bible and began hunting for places where Hebrews quoted the Old Testament and made a list of references. Next, I went back and looked at each instance and tried to come up with possible names for cards from each reference. Once I had that, I made the first draft of what I thought a card with that name and that verse might do in the game of Redemption. My original list consisted of 54 Dual Testament cards and 4 other cards that I came up with along the way. Now for the fun part. I will to show you where each card began followed by the end result.

CARD NAME: Love Righteousness OR Hate Wickedness
CARD TYPE: Good Enhancement OR Good Enhancement
CLASS: Territory OR None
IDENTIFIERS:
STATS: None OR 4/3
BRIGADE COLOR: White OR White
SPECIAL ABILITY: Search deck or discard pile for 2 Heroes and put them into play. OR Remove 2 Evil Characters from the game. Cannot be interrupted.
SCRIPTURE: But of the Son He says, “Your throne, O God, is forever and ever, And the righteous scepter is the scepter of His kingdom. “You have loved righteousness and hated lawlessness; Therefore God, Your God, has anointed You With the oil of gladness above Your companions.” (Hebrews 1:8-9 / Psalm 45:6-7)

EXPLANATION: Originally these cards were one card that had two parts in which you could use it as one or the other. The idea is that with two options the card could be flexible without being overpowered by having both abilities on one card. 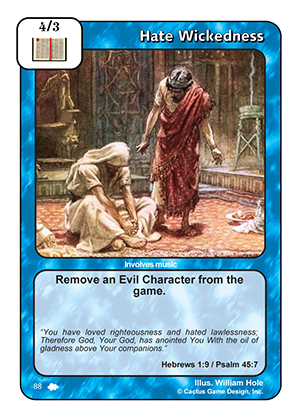 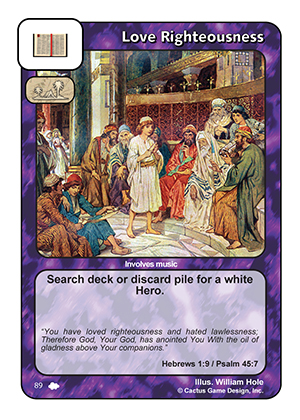 CARD NAME: They Will Perish OR You Will Remain
CARD TYPE: Good Enhancement OR Good Enhancement
CLASS: None OR Territory
IDENTIFIERS:
STATS: 4/3 OR None
BRIGADE COLOR: Red OR Red
SPECIAL ABILITY: Discard 2 Evil Characters of matching brigade. Cannot be prevented. OR Place on your Warrior Class Hero. That Hero cannot be removed from the game or discarded while this card remains on the Hero.
SCRIPTURE: They will perish, but You remain; And they all will become old like a garment, And like a mantle You will roll them up; Like a garment they will also be changed. But You are the same, And Your years will not come to an end.” (Hebrews 1:11-12 / Psalm 102:26-27)

EXPLANATION: Same as the card above, this card was intended to be a card with a choice. The interesting thing with this one is that the other part of the card never made it through the trimming process of what cards will be included and what cards will not. Clearly the starting point with the part that did make it through was changed dramatically as well. In the play testing process we realized we needed something to counteract “end the battle” cards and the name and verse fit but the rest did not, so it was retrofit with an ability, brigade, and card type that fit what the current meta needs. 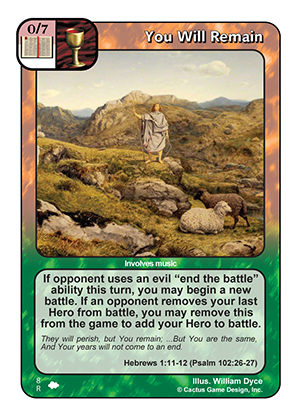 CARD NAME: Provoked
CARD TYPE: Evil Enhancement
CLASS: Territory
IDENTIFIERS:
STATS:
BRIGADE COLOR: Brown
SPECIAL ABILITY: Evil Character gains Taunt until end of turn.
SCRIPTURE: Therefore, just as the Holy Spirit says, “Today if you hear His voice, Do not harden your hearts as when they provoked Me, As in the day of trial in the wilderness, (Hebrews 3:7-8 / Psalm 95:7-8)

EXPLANATION: Admittedly this card in its original iteration was very controversial and problematic almost from the word “go”. The idea that any Evil Character could gain taunt was more expansive than we as a team decided was good for the game. Giving some characters taunt is fine, but giving it with nearly no limitation seems irresponsible to some. I agree. 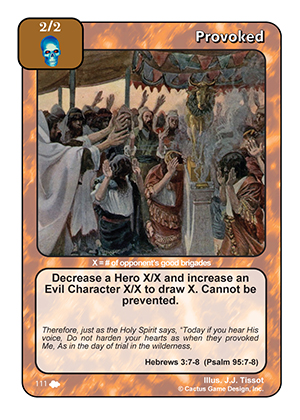 CARD NAME: Do Not Harden Your Hearts
CARD TYPE: Good Enhancement
CLASS:
IDENTIFIERS:
STATS: 2/2
BRIGADE COLOR: Multicolor
SPECIAL ABILITY: Interrupt the battle. Negate all evil convert abilities until end of turn. If a convert card has been played this battle, draw two cards and play the next enhancement.
SCRIPTURE: while it is said, “Today if you hear His voice, Do not harden your hearts, as when they provoked Me.” (Hebrews 3:15 / Psalm 95:7-8) 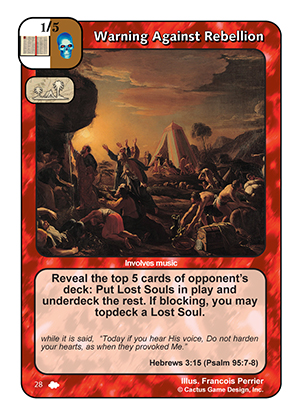 EXPLANATION: Well, with this card you win some and you lose some. The only part of my original card that made it was the scripture reference. Obviously the team made a much more versatile card than what I originally came up with, not to mention the “Involves Music” identifier it has makes it very useful for the now well-equipped musician theme. Now that I look back at all of these cards, musicians may be the greatest beneficiaries of this Dual Testament project when it is all said and done. Believe me when I say that was not intentional, but I can think of a few folks who would really love it. (BR)

The last four Dual Testament cards will be coming tomorrow in part 2 of this article.