Welcome back to part two of White Cloud! Last time I broke down four awesome Heroes from the new Cloud of Witness set. This time I’m going to take a look at some of the new faith Enhancements and how they provide white with options beyond Magnificat and ‘He is Risen’. Here’s that offense again:

I included 4 awesome faith Enhancements in this deck; I’ll start with the only one that isn’t actually white: 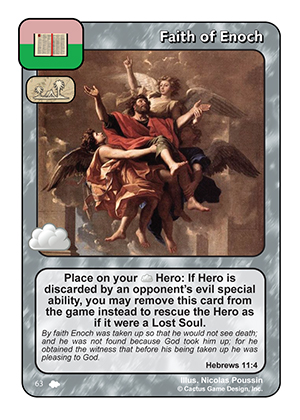 Wait! Is that? Could it be? An alternative rescue condition! We wanted to really represent Enoch’s story. This seemed to be the perfect way to do it, notice that there are quite a few limitations. First, you have to be using cloud Heroes. Second your opponent has to do the discarding. Third Faith of Enoch removes itself from the game, so this is a one-time deal (twice in Type 2). Still, since I have 3 green cloud Heroes it made sense to include this, as it forces your opponent to consider carefully how they want to block your rescue. No Antiochus or Doeg auto-blocks for them.

Next up we have a true battle winner: 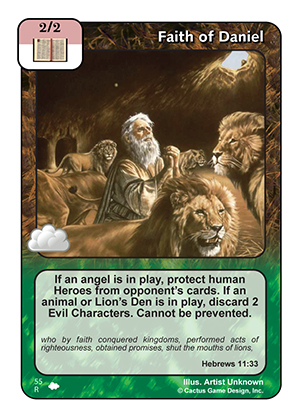 Faith of Daniel is a dynamic card with a couple of conditions. You can use it to gain simple protection if your The Angel of the Winds is in play. Or if you happen to be running with Lions tigers, and Bear, it becomes twice as nice. Since sometimes a Coliseum Lions run away, you can also get the discard bonus if they run back to the Lion’s Den. Notice also that this has a N.T. reference making it a cloud card, so we gave it CBP, so the National Promo Daniel can get use of it. The cloud Daniel can still recur it because all faith Enhancements in this set are cloud cards. 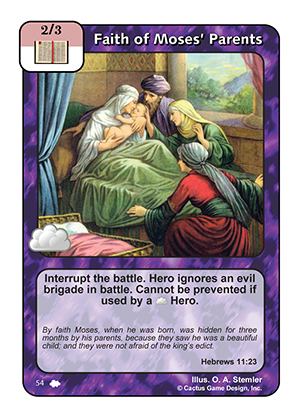 This is another example of matching up perfectly with the Bible story. Moses’ Parents were not afraid of The Murdering Pharaoh and hid baby Moses from him. Ignoring Pharaoh’s order, thus their Enhancement granting an in battle ignore. No way to get a pre-block snipe in here. It’s also CBP on cloud Heroes, further incentivizing the cloud offense instead of just splashing it into any white deck.

The final faith Enhancement I’m playing in this deck is Faith of Rahab: 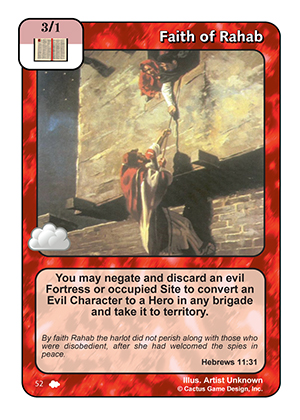 Rahab’s faith is represented in the Jericho story – after Rahab hid Joshua, Son of Nun’s Spies she was spared from the destruction of the city. Her faith Enhancement shows the destruction of the city by allowing you to negate and discard an evil Fortress or occupied Site (note that it can discard both old Jericho and new Jericho. Faith of Rahab is also a battle winner in that it converts an Evil Character to a Hero, and just like the Spies converted Rahab to their cause, bringing it to your territory.

These powerful faith Enhancements provide white (or clay) with the backbone of a powerful deck. Built into a cloud Cloud of Witness offense, all of the battle winners are very easily recurable, allowing you to build in a little more utility to deal with any problems you might encounter along the way.