As noted in Gabe’s first article introducing the Cloud of Witnesses set, we drew very heavily from Hebrews in this set.  One of the most inspirational passages in the Bible can be found in this epistle, in what we could call the Hall of Faith of Hebrews 11.  The NIV calls this section “Faith in Action,” and the NASB (which we now use on Redemption cards) calls it “The Triumphs of Faith.”  All of these titles are very apt, as the entire section shows the power of faith, and the central role it plays in the lives of those who have it.

The section starts with a very heavily-quoted verse, but what follows is just as important:

Now faith is the assurance of things hoped for, the conviction of things not seen. For by it the men of old gained approval.

By faith we understand that the worlds were prepared by the word of God, so that what is seen was not made out of things which are visible. (v1-3)

Faith is our steadfast belief in things we cannot see, touch, experience directly, but know to be true.  We were not there before Creation, but we know that God is the Creator, and nothing existed before him.  We did not live with the characters of the Old Testament, but through their testimony we know the power of God.

Each of the “men of old” (and women of old) who are directly mentioned or implied in Hebrews 11 are getting a reprint in this set, with their O.T. reference, but we are also making a Hebrews 11 “Faith of…” card for each of them that represents their faith, as well as the power of that faith.  Each of these cards shares a brigade with that character, but is also clay, the color of the Gospel; even though these stories are of “men of old,” the lessons are just as applicable today, as the writer of Hebrews is keen to note.

By faith Abel offered to God a better sacrifice than Cain, through which he obtained the testimony that he was righteous, God testifying about his gifts, and through faith, though he is dead, he still speaks. (v4)

In Redemption, prophets have a tendency to shuffle, but it goes deeper than that here.  After the Fall in the Garden of Eden, sacrifices were necessary to cover the stain of sin, up until the perfect sacrifice of Christ.  Abel’s Faith represents honoring God with that proper sacrifice through his faith, continuing to wash away while waiting for what was promised.  This non-permanent removal is represented through the shuffle, and it is stronger when used by Abel due to his “better sacrifice.”

By faith Enoch was taken up so that he would not see death; and he was not found because God took him up; for he obtained the witness that before his being taken up he was pleasing to God. (v5)

We know very little about Enoch in the current canon of the Bible, but what we do know is that he prophesied and was faithful to God, so much so that God took him up to heaven before death.  His Faith enhancement represents his example, and we can be so sure of salvation through God that even death should not frighten us.

By faith Noah, being warned by God about things not yet seen, in reverence prepared an ark for the salvation of his household, by which he condemned the world, and became an heir of the righteousness which is according to faith. (v7)

Noah had no evidence of a flood, no reason to believe such a thing should happen, no cause to build an ark on dry land.  And yet, he believed in things unseen, and in God’s promises, and so he did as he was told to prepare for The Flood.  His Faith Enhancement can pull many cards, but namely the Pitch and Gopher Wood that he used to build the Ark.  If he is facing evil, then God’s promise, which he had faith in, washes it all away (very little can withstand a decrease of 12/12).

By faith Abraham, when he was called, obeyed by going out to a place which he was to receive for an inheritance; and he went out, not knowing where he was going. By faith he lived as an alien in the land of promise, as in a foreign land, dwelling in tents with Isaac and Jacob, fellow heirs of the same promise; for he was looking for the city which has foundations, whose architect and builder is God. (v8-10)

By faith Abraham, when he was tested, offered up Isaac, and he who had received the promises was offering up his only begotten son; it was he to whom it was said, “In Isaac your descendants shall be called.” He considered that God is able to raise people even from the dead, from which he also received him back as a type. (v17-19) 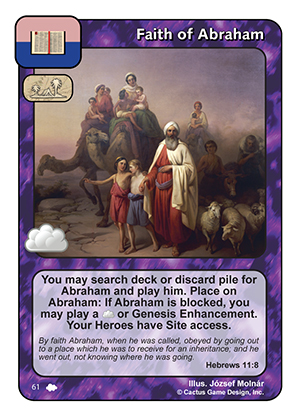 Abraham is one of the most faithful people God ever called in the entire Bible.  First, he hears the call of God out of nowhere, to just pick everything up and leave his home, people, and traditions behind, because by faith he would find something new that God promised.  He was even willing to sacrifice his own child as God instructed, because he had faith that God could do anything, and trusted that God’s promise of descendants would remain true. Abraham’s Faith is represented by calling him out (search), just as God did, and giving him the power to take what God promised. Abraham had a tendency to act first when confronted with trouble, so this power takes the form of a play-first, needed for such a large character to fight his enemies. 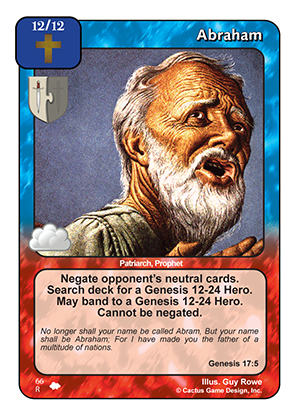 By faith even Sarah herself received ability to conceive, even beyond the proper time of life, since she considered Him faithful who had promised. Therefore there was born even of one man, and him as good as dead at that, as many descendants as the stars of heaven in number, and innumerable as the sand which is by the seashore. (v11-12) 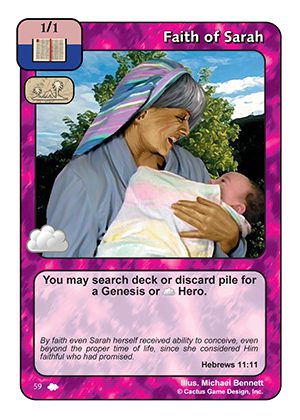 Even though we know that the story of Sarah isn’t one of perfect faith, we do know that she had the faith to believe that God would provide the descendents He promised.  Her Faith is rewarded with heirs to the promise beyond counting, and so her Faith Enhancement can search out these Heroes. 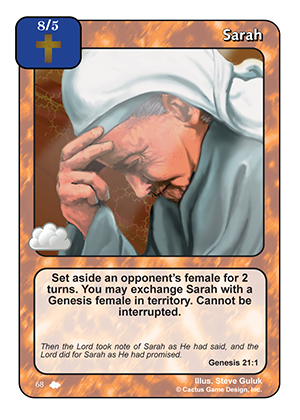 By faith Isaac blessed Jacob and Esau, even regarding things to come. (v20) 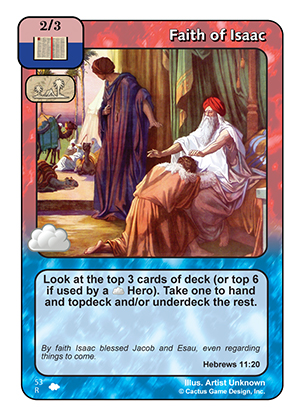 What good is a promise that cannot come true?  Isaac did not give his sons empty words with no truth behind them; he had faith that the promises would come to pass through God.  His Faith is represented by revealing “things to come” (look at deck) and allows for a blessing to face what is ahead (take one, then return to deck in any order). 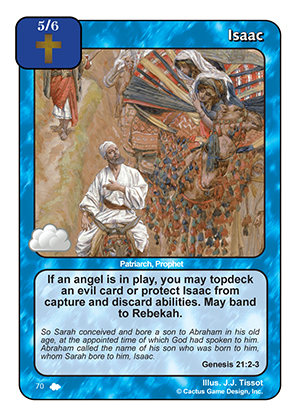 By faith Jacob, as he was dying, blessed each of the sons of Joseph, and worshiped, leaning on the top of his staff. (v21)

For those who have never read the blessing of Jacob, I highly recommend it (Genesis 48).  This is no simple blessing, as Jacob basically adopts Joseph’s children as his own, giving them their own share in his promise from God, and promising much in His name.  His Faith Enhancement reflects this powerful blessing, adopting two Heroes to share in your blessing (take two Heroes).

By faith Joseph, when he was dying, made mention of the exodus of the sons of Israel, and gave orders concerning his bones. (v22)

Joseph was dying in Egypt, a land foreign to the one promised by God to Abraham.  Here, Israel was prospering, he was greatly revered, and there was no reason for them to leave.  And yet, Joseph still believed that God’s promise for His people would come true, and that his own bones would be delivered to this Promised Land with the rest of Israel’s people. Joseph’s Faith protects your discard pile (his remains) from opponents, and also allows you to free all captives (as Israel was freed from Egypt).

By faith Moses, when he was born, was hidden for three months by his parents, because they saw he was a beautiful child; and they were not afraid of the king’s edict. (v23)

Moses’ parents faced a terrible situation, with a newborn boy who was sentenced to death by the powerful king who kept them in captivity.  Their Faith gave them the strength to confront (interrupt) the king’s edict, and act to ensure that their child was not lost (ignore).

By faith Moses, when he had grown up, refused to be called the son of Pharaoh’s daughter, choosing rather to endure ill-treatment with the people of God than to enjoy the passing pleasures of sin, considering the reproach of Christ greater riches than the treasures of Egypt; for he was looking to the reward. By faith he left Egypt, not fearing the wrath of the king; for he endured, as seeing Him who is unseen. By faith he kept the Passover and the sprinkling of the blood, so that he who destroyed the firstborn would not touch them. By faith they passed through the Red Sea as though they were passing through dry land; and the Egyptians, when they attempted it, were drowned. (v24-29)

Moses is many things, but he did not remain part of the Egyptian royal court.  Pharoah’s daughter raised him as if he were her child, but he abandoned this family.  He spurned the treasures and earthly riches ready for the taking, instead choosing his people and his God, having faith in the promise of what is to come.  His Faith allowed him to cast aside the worldly (negate and discard a non-Tabernacle Artifact) and the sins of the Pharaoh (or an evil Enhancement), and to keep true to God, allowing His people to reach the promise that was given.

Please join us again tomorrow as we continue these stories of faith in part 2!