With the “earlier than normal” release of Cloud of Witnesses this year, Cactus Game Design is making efforts to ensure everyone gets to know the new cards before we use them in tournaments over the summer. One way they’ve done that is to offer FREE LOCAL TOURNAMENTS this summer! For more details, see CactusRob’s post on the message boards.

Mr. Anderson has afforded us the opportunity to share up to a fourth of the set with you each week over the next four weeks! By my count we’ve only spoiled 25 cards so far on Land of Redemption this week. I’ll rectify that for you today.

He’s our plan for how we’d like to share the previews with you, our faithful readers. This plan is tentative and depends on the authors and their ability to get previews ready for all of us.

As you enjoy these previews, any card that is featured with a large image in an article can be clicked on to view a high resolution version of the same card.

Thanks to wyatt_marcum on the message boards for inspiring the rest of this week’s previews!

By releasing new cards each year we are bound to make some old cards obsolete. But we also make an effort to breathe new life into old cards when we can. This can be seen as far back as the Kings set when King Zedekiah granted “cannot be negated” to the Prophets Enhancement Dungeon of Malchiah.

You’ve seen how Jacob (Israel) might encourage people to start using Leah in their decks again. And you’ve seen how David, the Psalmist might cause David’s Harp to see some play. You might have even noticed how Joshua, Son of Nun will cause Captain of the Host to make a comeback… oh wait, he already sees a lot of play. Well, here’s a lady that could bring back several old cards! 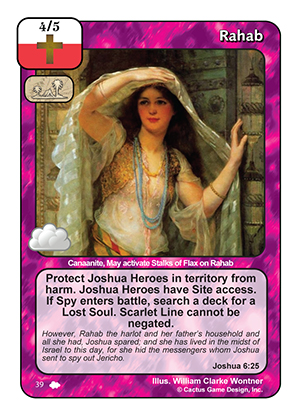 Between Joshua and Rahab you might notice the start to a Joshua offense. Since it hasn’t really mattered before now, I’m going to guess most people aren’t familiar with which cards in the game are from the book of Joshua.

After seeing Rahab’s ability, Spy is a pretty obvious one. He’s been used for a number of tricks over the years. Now we can add “soul searching” to his resume! Did you know Caleb is also a Joshua Hero?

I’m going to guess that most players either don’t know or don’t remember what Scarlet Line does. The “cannot be blocked by” language on this old card translates to “ignore” and makes for a cannot be negated battle winner. Will you use it on Rahab? Or will you splash Rahab into a female deck that uses cards like Ruth and Susanna?

Rahab also helps the underrated card Stalks of Flax see play since it no longer takes up a spot on your Artifact Pile. Did you know that all of these cards that get the bonus are tied directly to Rahab’s story and can be searched for with Faith of Joshua? It might be time to go read Joshua chapter 6!

Here’s another Hero that encourages the use of old cards: 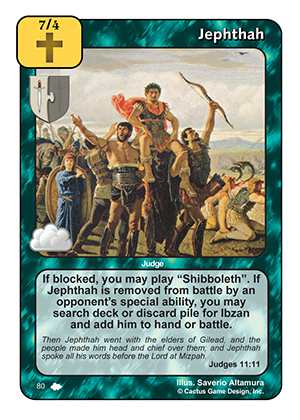 This version of Jephthah focuses on an entirely different part of his story than prior versions. It was during Jephthah’s time as a Judge that the story revolving around “Shibboleth” happened. When’s the last time you saw that card played? Have you ever? Yet, when it’s used correctly it can have devastating effect!

We also have an example of one of several “add to battle” abilities you’ll find in Cloud of Witnesses. If you want that strong ability you have to include an undervalued Judge in your deck. Ibzan has been overshadowed by Judges like Gideon, Samuel, Jephthah and Ehud. Will he make a comeback? I can ensure you that your opponent won’t want to play a Grapes of Wrath against Jephthah if you have Ibzan in your deck! 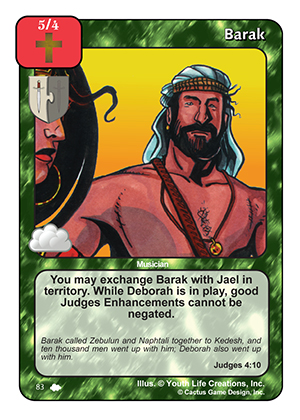 Barak worked closely with Deborah to free Israel from Sisera’s Oppression. Even though it was Barak who defeated Sisera’s Army, ultimately it was Jael that God used to defeat Sisera himself. With ties to both Deborah and Jael, Barak should cause both to see more play.

Assuming you have Deborah in play, what are the Enhancements that matter in combination with Barak and Jael? I’m glad you asked! They are Jael’s Nail, Capturing Canaan, and The Stars. All of these can win a battle for you under the right conditions.

The last card we’ll share with you this week also gives a number of old cards an added bonus: 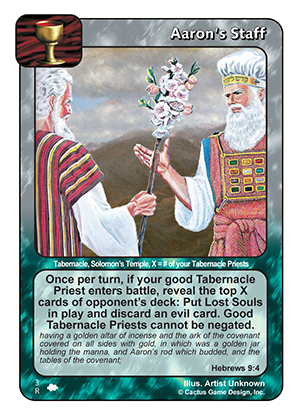 Tabernacle Priests like Aaron and Phinehas, son of Eleazar see a decent amount of play. I imagine the new Eli the Priest promo will too.

But it doesn’t end there. The X identifier also counts your evil Tabernacle Priests. We might even see Evil Characters like Abihu, Nadab, Hophni, son of Eli and Phinehas, son of Eli in decks occasionally.

That’s all the previews we have for you this week. Thanks for joining us! Be sure to check back Monday for more Cloud of Witnesses previews!