White Brigade is often overlooked and undervalued. It is frequently the brigade that ‘oddball’ characters without major themes get placed. Examples include Zerubbabel and Woman of Wisdom. It is the home to 3 O.T. mini-themes, Daniel, Musicians, and Ruth Heroes. None of these are very good on their own. UNTIL NOW! It’s time for white to make a resurgence. I present to you: White Cloud!

This is the base of an offense I play tested this year that I call ‘White Cloud’. Most of the ‘cloud’ Heroes are multi-brigade. This allows for an interesting variety of base colors that you can build them on – green, gold, blue and white are all great choices. It works out well to play a White Cloud, as the underutilized themes in that brigade get big boosts through impressive Heroes. Let’s start with David, the Psalmist: 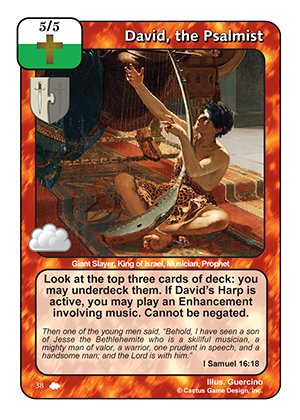 A white/green musician with pretty good initiative numbers, and a way to drop something pre-block, David, the Psalmist fills a unique niche that the musician theme has always lacked – a way to branch to a second brigade while still maintaining consistency. He looks at the top 3 cards of your deck as a representation of his prayers to God before he entered battle, and God revealing to him how to proceed. Ultimately you get to decide what to do with those cards. If you like them, you can put them back. If you don’t like them, go ahead and put them away for another day. There are a number of good pre-block options in both green and white. David can play them pre-block either via Hidden Treasures or via his special ability if you have David’s Harp active, which could be beneficial if you get in a spot of trouble. Note that it is currently impossible to have both David’s Harp and Hidden Treasures active, so you can’t set up a double-play pre-block.

The other Hero that gives his theme a direct boost is Daniel: 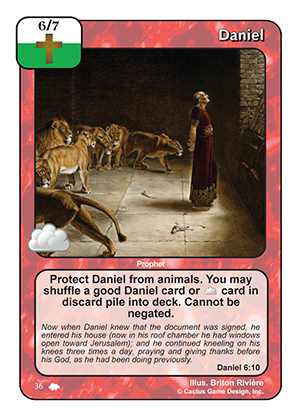 Daniel was a very interesting card to playtest, because we wanted to strike a delicate balance between making this version playable, while not overshadowing our National Promo Daniel. I think we did a really good job. Daniel has a useful recursion ability, and can help your Foretelling Angel. He also gets a boost from his ‘cloud’ status. However, National Promo Daniel + Michael is still one of the best rescues in the game. Which Daniel you pick depends greatly on what you put around it. If you’re going to have other cloud boosting cards, you might look to this Daniel, if you want one that’s strong in his own merits you might look to the Promo Daniel.

The last reprinted Hero in this offense is a doozy: 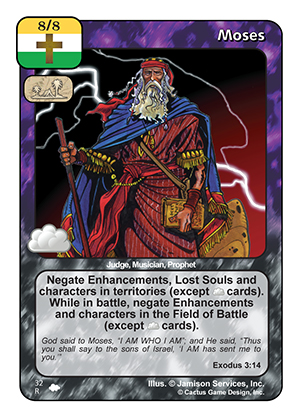 Moses really brings this offense together – Note that he’s a musician, and a cloud Hero, and a gold Judge. He’s also a green prophet if you go with Hidden Treasures. The only thing he isn’t is a N.T. Hero. His ability however, could present some problems. He’s territory class and functions very similarly to Covenant with Death in that he’s going to negate your characters in addition to your opponents. He also negates, though doesn’t stop you from playing territory class Enhancements, making Hypocrisy a great fit on the defensive side. Provisions feels like it should fit in this offense, but really doesn’t because of Moses. He can truly be a double-edged sword. In battle he’s the same old Moses except he negates Lost Souls and gets the benefit of playing green and white. But also the downside of being targeted as both, and giving your opponent a boost to any card like Emperor Vitellius. Note that he doesn’t negate ‘cloud’ cards which leads us to the reason to play this as a white deck instead of a green one: 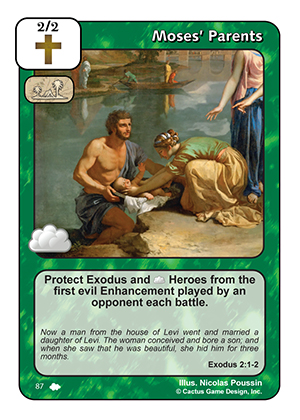 Protecting your cloud Heroes is a very good ability, and helps to win the war of attrition when you play a balanced deck. However, with relatively puny numbers, and no theme, Moses’ Parents really only fits in a white deck. Splashing them into the green or blue based clouds only weakens your deck as this really isn’t a Hero you want in battle. In this offense however, they get access to a ton of Faith Enhancements, including their own. The Faith Enhancements will be spoiled next time, but I can tell you they are all powerful battle winners.

These four new Heroes can give you the start to a variety of powerful decks, and work really well together – I’m excited to share the Faith Enhancements I used next time around!