Communication and language can be a difficult thing to get right. If you’ve been playing Redemption for very long I’m sure you’ve noticed the progression of card wording over the years as the game’s creators have attempted to have cleaner wording.

Today we’re going to take a look at something that a lot of games have implemented that can help with clean wording and clear communication. Whether it’s a CCG, a board game, or something else that uses cards as one of it’s tools, most modern games make use of symbols in the card text.

Symbols or icons within a game are universally understood to mean something unique to the mechanics of the game. That’s certainly true of Redemption. We have an area on every card type except Lost Souls that’s called the “card icon”.

What might it look like for Redemption to use icons instead of words in the special ability? Let’s begin by looking at some of the starter deck cards. Here’s one you’re probably familiar with:

It’s a rather simple change. But is it clear enough that players will easily understand that they can discard a card with the dragon symbol in it’s icon box?

Here’s another example using a popular card you probably know:

This also seems pretty straight forward to me. Does the use of the Bible icon improve the overall look of the card?

This type of change, if Redemption were to make it, would probably take a little getting used to for some players. Here’s a look at another example replacing the phrase evil Enhancement with the skull icon:

Thus far all of those examples have been pretty simple. There’s only been one icon per card to replace one associated word or phrase.

But what about when there’s more than one icon used? Does it improve the special ability or does it make it look cluttered?

Now, let’s take a big leap and look at a card from Persecuted Church that uses 4 total with 3 of them being unique:

We don’t have to draw the line at just card icons, like the cross for Heroes and the dragon for Evil Characters. We could use icons to represent brigades as well: 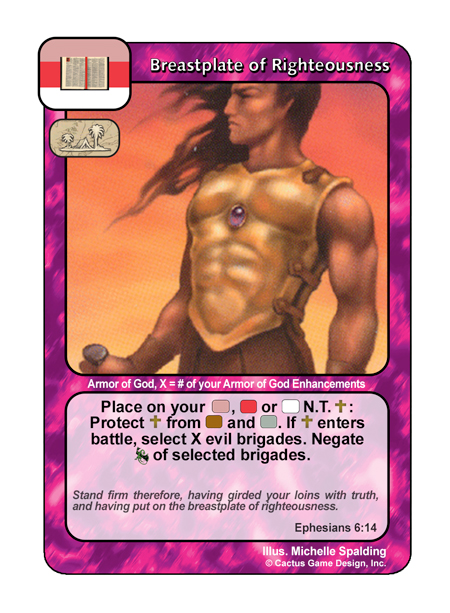 Using icons can become confusing and make a card face look messy if it’s overdone. If Redemption were ever to use icons in special ability text I think we would probably just limit it to icons found on cards. But maybe the brigades are something I would just need to get used to.

5 thoughts on “Learning From Our Peers – Iconic”