Music Leader is one of my favorite cards from The Persecuted Church set. I find myself wanting to incorporate him into several of the decks I build. He’s likely to have a big impact on the way people build decks for a long time to come. 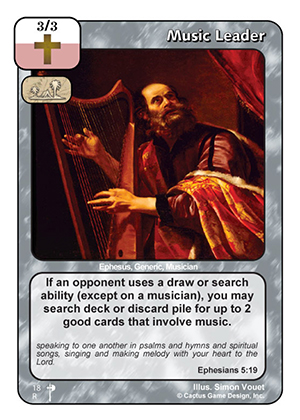 Typically cards that depend on your opponent’s actions in order to be effective aren’t that good. But Music Leader triggers off of things that almost every competitive deck wants to do, usually often – draw and search.

Even if your opponent chooses not to draw or search due to your Music Leader he’s still done his job. While I would usually like to get copies of the musical cards I’ve included to take advantage of Mr. Utility, slowing my opponent’s game plan is well worth the investment.

More Than Just a Musician

The obvious use of Music Leader is in a musician offense. But that’s just the tip of the iceberg. Lets take a look at some of the various builds that can take advantage of what he can do.

Gardenciples is an offense based around The Garden Tomb and the six Heroes that can take advantage of its ignore ability. Music Leader can easily splash into this offense to give you multiple uses of Magnificat and Passover Hymn.

Judges can take advantage of Music Leader to get multiple uses out of some of the most powerful enhancements in the game through the recursion of Battle Prayer. You can also grab Moses and Deborah from your deck or discard pile since they both count as a musician.

Clay offenses are able to keep a battle winner and a negate in hand through recursion of Praise from Prison and Word of Christ.

Royalty can get both King David and King Solomon as well as gain access to multiple uses of Royal Parade.

Even angels can take advantage of Music Leader to gain multiple uses of quality cards like Protection of Angels and Gloria in Excelsis Deo.

Prophets don’t have enhancements that involve music that I consider high enough quality to mention. However, access to strong heroes like Miriam, Isaiah, Habakkuk, and David mean that Music Leader is still worth considering. Since there are multiple clay/green prophets in the game it’s not a stretch to think Music Leader belongs in such an offense.

Speaking of David, red warriors love Mr. Utility. Not only does he get David, but he also gets you Sing and Praise, an underrated side battle card. Most importantly he can grab A Soldier’s Prayer which in turn gives you unlimited access to any red enhancement in your deck. Bravery of David? Yes please!

Besides all those obvious uses, you can easily crush your opponent’s recursion plan by using Music Leader to get Sing and Praise from the J starter deck.

With such easy access to reusable good cards it seems silly not to use I Am Holy in most offenses that include Music Leader. Every time your opponent does something they want to do (like draw or search) you get free cards, then use one of those to whittle away at your opponent’s defense.

With so many awesome ways to use Music Leader we can expect to see lots of him this tournament season. Whether or not you choose to use him, you need to be prepared to face him and know what he’s capable of.