Today I will share a defense that has been very successful for me in T1. It has morphed a bit over the last 2 ½ years, but the key parts have stayed the same. One of the key parts is a Babylonian from the TexP expansion that I pretty much never run into in opposing decks. There are certainly a lot of viable defenses in Redemption right now, so I shouldn’t be surprised that a specific character isn’t used frequently. Nonetheless, I think bringing the character to light to remind readers of his usefulness is warranted. The character I am talking about is Nebuchadnezzar.

“If no Daniel hero is in play, search deck for an O.T. Crimson card and add it to hand or battle. Cannot be negated.” 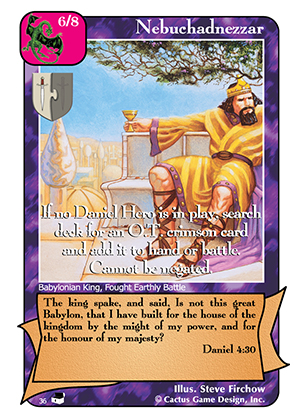 This is a unique ability that provides a lot of power and flexibility to the person controlling Nebuchadnezzar. No other Evil Character has a toolbox quite like him, in my opinion. He’s fantastic against Heroes equipped with Peace, as he can add an O.T. crimson Evil Character to battle. Scattered and Foreign Wives are both O.T. crimson cards, and make great targets for Nebuchadnezzar, depending on if your opponent has drawn cards or is banding. And Desecrate the Temple is an intriguing deck addition that has the potential to discard Son of God from your opponent’s deck.

I’ve been finding success with Nebuchadnezzar as a “splash” in a magicians defense. The defense looks something like this:

Quick note: The reason I include Drawn Sword as a support card is because I often play it as an offensive battlewinner, usually on Ezekiel or Benaiah (Warriors). Drawn Sword cannot be prevented, which is great against fight by the number Heroes. Otherwise, it’s not as useful, since it can be easily negated. I can usually get enough defensive stops with the other defensive cards to let Drawn Sword be used on offense.

At its base, this is pretty much a standard magicians defense. Foreign Wives and The Serpent are powerful, splashable Evil Characters that can play the pale green Enhancements. With the PC expansion, there are more options for a magicians defense. I might be going against the grain by not adding The Judean Mediums. I just don’t have many slots available, as I keep the deck that uses this defense to 50 cards. The Amalekite’s Slave is also very splashable, although his use has dimished a lot over the last few years, as there are so many ways to prevent his ability now. I use him as a way to get Nebuchadnezzar on the table faster.

The Enhancements are also fairly standard. Scattered, Forgotten History, and Death of Unrighteous are your typical pale green battlewinners (as they should be). Each of these wins battles in different situations, and usually can’t be negated. I have two magicians to recur Invoking Terror from the bottom of my deck (Elymas the Sorcerer would be a great 3rd character to do this). Invoking Terror is more powerful when you include anti-meta cards like CWD, DD, and HSR, since their deck will be slower. Two Thousand Horses is normally not in the deck, but I’ve been using it to good success recently, as it draws cards and can let you get one of the “big three” (Scattered, Forgotten History, Death of Unrighteous) into the battle when you normally wouldn’t be able to.

Desecrate the Temple is the last Enhancement, and is unique in that only 3 of my characters can use it – Nebuchadnezzar, Chaldeans, and Astrologers. It has the ability to discard Son of God, but only if my opponent doesn’t already have an Artifact, Temple, or Dominant in their territory. Other good players have asked me “Why not use Confusion instead?” My answer is “DtT can be searched and played by The Amalekite’s Slave/Nebuchadnezzar”.

I’ve used this defense, with a few modifications, in a State tournament, a Regional tournament, and multiple times on ROOT, and I’ve discarded my opponent’s Son of God about 50% of the time. It’s one of those cards that works fantastic early in the game. If it doesn’t, then your magicians with the “big 3” pale green Enhancements, anti-meta Artifacts, Magic Charms, and good character abilities can often be enough. If Desecrate the Temple does work, you should win the game, and not just because you discarded your opponent’s Son of God: Because you have the 3-Liner LS and Death of Unrighteous in your deck. This alone can stall for many turns if you don’t have to worry about Son of God.

Nebuchadnezzar plays a unique role in this deck. His value usually diminishes very quickly if he doesn’t use his ability early in the game. Sometimes he is sitting in territory so that Forest Fire and Drawn Sword have a Babylonian in play. He can only play 3 of my Evil Enhancements and doesn’t have the most useful of numbers. And Daniel Heroes might be in your opponent’s deck, especially now that The Foretelling Angel has been printed. But the ability to pull a card that can potentially discard < class="wp-live-preview"a href="http://landofredemption.com/wp-content/uploads/2015/04/Son_of_God_pv.jpg">Son of God from your opponent’s deck, and the fact that he can be searched out with The Amalekite’s Slave, makes him a small investment that has the potential to hit huge rewards. With the dependability of the other magicians on defense, I’ve found the risk of Nebuchadnezzar/DtT to be worth it in this defense.