Since the release of the 2011 tins a “top tier” of offensive Enhancements have emerged. These cards are based around utility/speed and cannot be negated (CBN) battle winners.  Cards like “Wheel Within a Wheel, Samuel’s Edict, Bravery of David, Live Coal and Isaiah’s Call” have all found places in top tier decks.

Despite a lack of speed production, interrupt, or CBN, Peace is a strong candidate for cracking the elite tier for offensive Enhancements. Before I go further here it is. 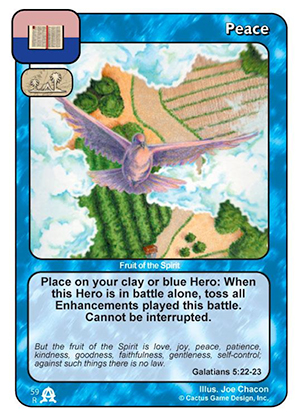 In my opinion, this is the best good Enhancement in The Early Church (TEC) set.  Peace is an excellent counter to the majority of defensive strategies in the game.  It shuts down Enhancement powered chump blocks and laughs at CBN end the battle cards. Peace, in effect, protects all cards in play from special abilities on opponent’s Enhancements.

Naturally ingrained in the game is the fact that defense wants to have higher defensive stats (toughness).  If a battle is determined by the numbers, defense gets a block if its toughness is higher then the opponent’s offense (strength).  This mechanic has been true since the beginning of Redemption in 1995. This means that most defensive cards have high toughness and little to no strength. The result of this trend is that toss is an incredibly effective way to redeem Lost Souls. Your opponent will rarely have enough Enhancements to toss for a worthwhile effect on your peace’d out Hero. Even if they can band against you, you know your running toss. You should have a couple multiple use Enhancements with high enough strength to support you in a toss battle, so go ahead and toss to decrease their Evil Characters to death.

Peace fits devastatingly well into two already very powerful offenses (not counting clay centered offenses).  The first is a Disciple’s based offense.  Peter (TEC) is a great Hero to peace out. He also has the ability to heal another Hero who your opponent may have decreased in a toss battle you created. Matthias is also a solid Hero to play Peace on.

Perhaps the strongest Disciple to get Peace on is Bartholomew.  This requires adding clay to Bart, but that isn’t hard to do. On his own, Bart stops 2 major counters against a toss Hero, Unholy Writ and Magic Charms.  Add Herod’s Temple to that mix and it gets even harder for your opponent to deal with him.

As far as Enhancement support for Peace goes, Disciple decks also have access to Preaching at Pentecost and Passover Hymn. Both of these Enhancements have good abilities to win battles on their own but, with toss they become more versatile.  Both have an X for strength where X is the number of Disciples you control. This mean X could be as high as 12 but probably averages 3-7, which is very strong in a toss battle.  We aren’t done with the value of toss with Disciples yet.  Disciples will almost always run Thaddeus. An Artifact which greatly strengthens Thad is Crown of Thorns (CoT).  I don’t even have to explain the benefit of CoT with toss. It is absurdly good.

The second offense getting a boost from Peace is Genesis. Peace dramatically improves Genesis’ ability to deal with play first Evil Characters and weapons. Genesis many times relies on getting initiative with Joseph/Benjamin to play CBN battle winners or uses Reuben’s Torn Clothes for pre-block ignore.

I believe, today’s top Genesis decks will be adding a new toy to their bag of tricks.  Characters like Judah and Simeon, who are good but many times don’t quite make the cut in finely tuned Genesis decks, will now be reconsidered.  Having the ability to come at an opponent in a brand new way with Genesis will catch many players off guard.  Simeon with Peace is an outstanding rescue even against balanced or defensive heavy decks.  Genesis has another dirty little secret in their ability to use toss, Seven Years of Plenty. Yes, 7 Years has a great search and draw ability but if you draw it late it is worthless! Not anymore! If you have a Genesis toss rescue, Seven Years of Plenty has a 7 strength which is a huge amount to decrease a blocker.

Perhaps one of the strongest uses for Peace in a Genesis offense is on Zebulun.  This can be an incredibly powerful combination if run tactfully.  So let’s say Zebulun is ignoring 5 and greater and you put Peace on him.  If you have Answer to Prayer to toss you win.  For 4 and greater all you need is Abraham’s Descendant, Job Overcomes or Obedience of Noah. Eight or greater and Seven Years of Plenty does the trick.  Genesis, which many consider top tier already, just got a lot better.

All in all, I believe toss becoming a usable offensive strategy radically transforms the game and Peace is a top dog in the fight.

Josiah and Jerome are brothers from Pennsylvania. Jerome started playing Redemption in 2010 and Josiah in 2011. Thanks to Jerome's ability to analyze cards and with help from other players and leaders like Jon M. and Chad Z., the brothers quickly became competitive players on the national circuit. Both have enjoyed getting connected with the nation wide Redemption community and greatly appreciate the friendships which have been cultivated through Redemption. Josiah and Jerome both have a love for Redemption and are excited to forward the game in any way possible. View all posts by Josiah here...

One thought on “Peace – The Most Powerful Good Enhancement in TEC?!?”