Paul’s letter to the Colossi Church and his letter to Philemon give us some unique insight into this group of believers. Colossians was written primarily to encourage the church to grow in their faith and to refute heretical teaching that was threatening the church. Let’s take look at how that plays out in the development of the Colossi Church for Redemption.

Paul focuses heavily on the preeminence of Jesus Christ. We wanted to find a way to emphasize that as part of the theme for the Colossi Church. The way we chose to highlight that is to have certain church members work with Enhancements that have Christ or Jesus in the title or scripture verse.

Archippus is one of the named members of the Colossi church. Paul even refers to him as “our fellow soldier” in his letter to Philemon. We also know that he was given a special ministry from the Lord. We don’t know what that ministry was, but we can be certain it promoted Jesus Christ and most likely benefited his church. 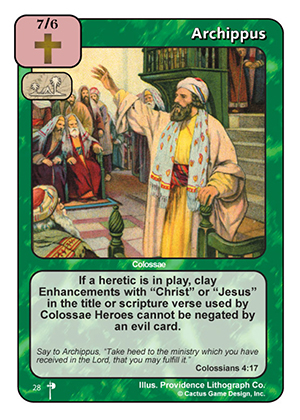 This reprint of the F deck starter character has become a territory class Hero to allow his “ministry” (promoting Christ Jesus) to benefit all his fellow church members. Since we know that “cannot be negated” is a very strong ability modifier, we’ve added the thematic restriction of requiring a heretic to be in play. As I mentioned in the Jude preview, the temptation to pair a Colossi Church offense with a heretic defense makes Jude pair well with this church.

Are you curious about which clay Enhancements have Christ or Jesus in the title or scripture verse? They are Unity in Christ, Peter’s Sermon, Miracle at the Gate, Bravery of Priscilla, A New Creation, Created by Christ, Of One Mind, Wisdom, and Word of Christ.

Some of those can be used to win battles, but all are situational.

Apphia is another named member of the Colossi church. She may have been Philemon’s wife and/or Archippus’ mother, but we don’t know for sure. We do know that she was important enough in the church for Paul to name her, therefore, she also helps promote the “Christ Jesus” theme. 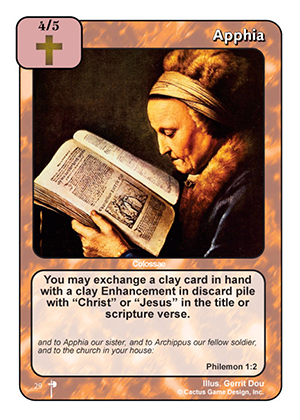 Apphia really shines in the late game, when you want to reuse certain Enhancements from the list above. With smallish numbers, she might even get initiative to use the Enhancement she brings back.

Epaphras is thought to be the founder of the Church in Colossae. He heard the Gospel from Paul when he was preaching in Ephesus, then took it back to his hometown and shared it with others. As such, Epaphras is the “lynchpin” character that grows the Colossi Church. 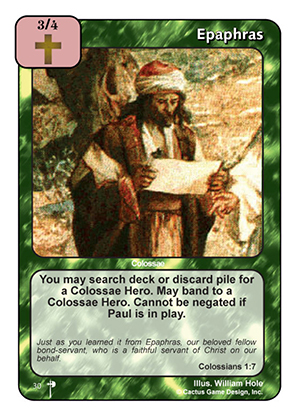 Epaphras also worked closely with Paul. You’ll hear more about this in tomorrow’s devotion. When his mentor and “spiritual father” is in play, Epaphras is unstoppable.

Although we do not condone slavery in any way, it was common in Roman culture during the time when Colossians was written. We learn from the book of Philemon that a slave named Onesimus ran away from his master. He later found Paul and received the Gospel. 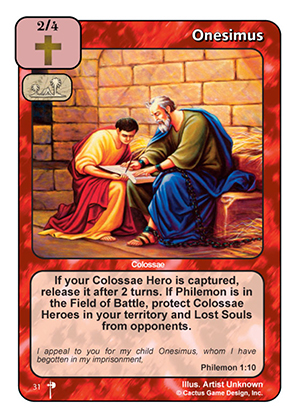 While Paul would have loved to keep Onesimus close by, he knew he needed to send him back to Colossi. But he didn’t send him alone. He also penned a letter of instruction, pleading with Philemon to accept him not as a slave, but as a brother in Christ. We end up with a thematic ability for Onesimus that releases captured Heroes and grants protection tied to Philemon.

Speaking of Philemon, we understand that he was a leader in the Colossi Church. In fact, the church met in his home! 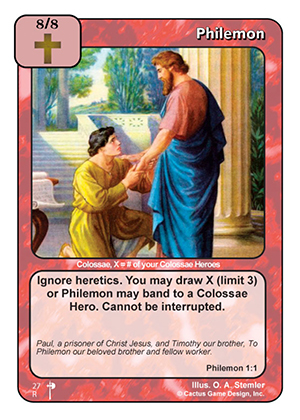 As a church leader, Philemon can bring other church members into battle. He also provides an in set counter to the strong heretics we’ve added to the game. If you’re concerned about your opponent banding to your heretic defense, you might want to rescue with Philemon.

We’ve represented his wealth, as we often do, by allowing him to draw cards. His ability even gets better the more church members you have. But you’ll have to make a choice – draw or band?

The Colossi Church should be competitive right from the start. Even with only 5 Heroes in print for this church, if you add Jude and a few of your favorite missionaries or Heroes from other churches, you’ll have a powerful offense. You can select your favorite “Christ Jesus” Enhancements and fill in the rest with other clay cards. Pair it up with a heretic defense that fits your style of play and you’re ready for a game!