Today’s preview is of a small, 3 card theme boost for one of the most popular defensive strategies—Magicians. First let’s look at some of the reasons Magicians are so strong.

There are certainly other reasons that magicians are so good, but I believe the ones mentioned above are the main ones, and coincidentally the three cards that Magicians will get in this next set each fit into one of those three areas.

The first card that we’ll look at is The Judean Mediums. 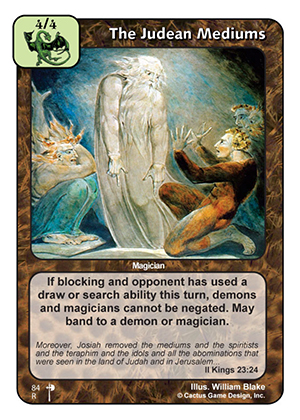 This card is actually a reprint of the Prophets card Workers with Familiar Spirits. Originally they were just going to be Mediums, but their ability ended up becoming fairly strong. With Type 2 in mind, we decided to add “The Judean” to make them a unique character.

Now you might question how good can an ability be if it is dependent on my opponent doing something? Well, if The Judean Mediums never triggers due to my opponent never using a search or draw ability, then I consider that a win for me. When my opponent does trigger them, it opens up all kinds of opportunities for me. This card is going to cause people to pull out those old demons with awesome abilities that never get used because they are not “cannot be interrupted/prevented/negated.”

The next card from this mini-theme is another reprint from the Prophets set, Wizard (formerly Wizards). 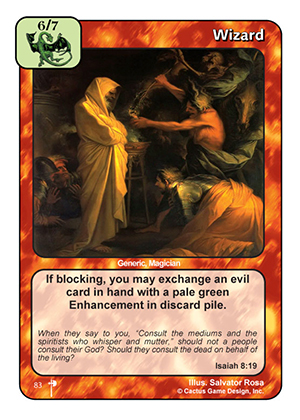 With Wizard, magicians get another way to recur their powerful Enhancements. Forced to use your Invoking Terror on a non-multi color magician? No worries, Wizard can get that back for you. Facing a huge banding chain and already used your Scattered? Wizard is here to help.

Perhaps the best part about Wizard is that he ensures that none of your evil cards become “dead” cards—cards that will be useless because of something your opponent has already played, such as Falling Away when your opponent has played Guardian of Your Souls. Now, instead of having to sadly discard Falling Away as a wasted Dominant, you can turn it into another use of whatever pale green evil Enhancement you happen to need. Yes please.

The last card to be revealed is Crooked Ways. This is a Territory Class Enhancement with the ability “Place on your Magician: While all of your human Evil Characters are Magicians…” oh rats, I’m almost at my 600 word limit for this preview article. Guess we’ll have to wait a bit on the rest of that ability. Rest assured that if you can fulfill the condition, you will gain incredible knowledge…