Today’s preview comes from probably my favorite brigade of all time. If I had to choose one defensive brigade to use for the rest of eternity (or however long I play Redemption), it would most certainly be the brown brigade.

Now because brown does not really have a theme in the New Testament, where this set is focused, we decided to reprint some Evil Kings from the Old Testament to boost a theme that has some potential, but isn’t quite there in terms of being a top-tier defense—Kings of Israel. The Kings of Israel theme centers around the powerful Gates of Samaria Fortress. This set gives us two Israelite Kings with some really strong abilities.

The first is King Ahaziah. 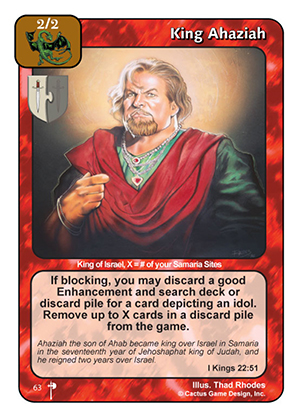 First printed in the Prophets set as a 5/7 Evil Character with no special ability, King Ahaziah is now a 2/2 Warrior Class King to represent the two years he reigned in Israel. The Bible says that he did evil in the eyes of the Lord and worshiped the false god Baal like his father King Ahab before him had done.

Because of his connection to false gods and idols, King Ahaziah is able to search deck or discard for a card depicting an idol. His ability doesn’t stop there however. He is also able to discard a good enhancement and remove X cards from a discard pile from the game (X=your Samaria Sites). This represents how King Ahaziah promoted evil and sacrificed to the false gods.

The second King we will be seeing is a reprint of King Jeroboam II. Originally a 4/5 Black Evil Character from the Kings set, King Jeroboam II is now found in the brown brigade to fit with the Kings of Israel theme.

His ability, or should I say abilities, will give his owner several strong options (though only one may be chosen), the last of which is to take a Damascus Site–like the original version. The rest of the abilities? Perhaps we should save the rest as a surprise, but rest assured he will help brown in one of the areas that it has lacked over the years (albeit needing some Samaria Sites to be in play)…

Finally, let’s look at a card that is absolutely going to make people want to play brown Kings of Israel this upcoming tournament season. 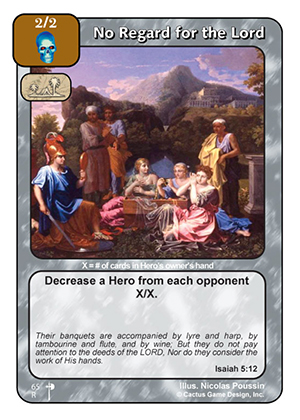 No Regard for the Lord is going to be amazing in multi-player as it will allow you to target the strongest Heroes of each opponent and in most cases take them out. If played during your turn, your opponents will typically have 8 card hands (X = # of cards in Hero’s owner’s hand) so this will be able to knock out nearly all of the most powerful Heroes including Angel Under the Oak, Michael, Moses, The Strong Angel, Thaddeus, Simeon, Samuel and nearly all of the new Clay Heroes we will be seeing in this set.

Furthermore, it can also be a potential battle winner and it may force the attacking player to choose between negating it or allowing it to knock out the strong Heroes of the players not involved in the battle. Whenever I am able to put my opponent in a difficult position where he might end up making the wrong decision, that puts me at an advantage.

Brown already has a lot of cards with the decrease ability, but this could be the one that finally makes the decrease strategy strong enough to be a high level defense.

Will you be the one to take the Kings of Israel to the top and tell the rest of the Redemption world, “King Me!”?

One thought on “King Me”