In the Disciples set we began a mini-theme of N.T. Lost Soul interaction. You may have noticed this on cards like the “Beggar” Lost Soul, Creeping Deceiver and False Teacher. In The Persecuted Church we continue building on that mini-theme. Today we’re going to take a look at the N.T. Lost Souls that will be inducted into the game in just a few short weeks.

Searching a Lost Soul out of your opponent’s deck is something I’m sure most of you are familiar with. But have you ever considered searching out your own Lost Soul? Until now, all the ways you could do that would be detrimental to your strategy. The “Escape” Lost Soul is going to change things. 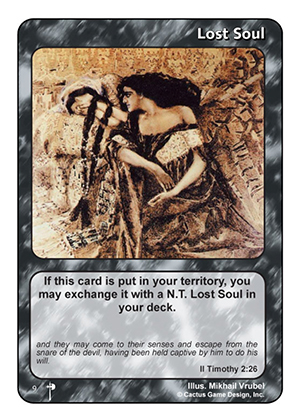 If you just spent a moment considering which of your Lost Soul cards you’d choose to search out, the “2-Liner” or “3-Liner” probably came to mind. Fortunately for the N.T. Lost Soul theme and players everywhere, the “Liners” are O.T.

So which N.T. Lost Souls are good to exchange with? The “N.T. Only” Lost Soul and “First Round Protect” both come to mind because they’re difficult to rescue for some offenses.

If you’ve designed your deck so that the “Pigs” Lost Soul does not hamper you, it can have a strong impact on the game. The same can be said for the “Speed Bump”. I fully expect those Souls to see increased play next season.

The “Beggar” Lost Soul is another one that you can take advantage of with “Escape”. If you have any Sites in your deck the “Hand Discard” Lost a Soul has recycling potential with “Escape”, “Beggar” and the “Site Remove” Lost Soul or anything that will return a Lost Soul to your deck.

Speaking of Lost Souls that work with Sites and the “Escape” Lost Soul, I’d like to introduce you to the “Tempter”. 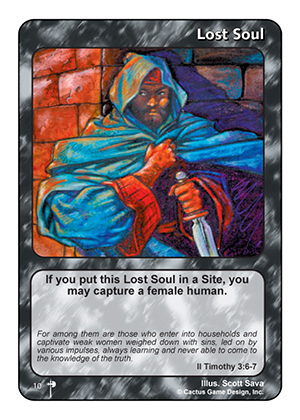 This Lost Soul is by no means a “nice guy”. He lures women in and captures them. Not every deck has a female for you to capture but there are quite a few females that are found in top decks. I commonly see Damsel, Lot’s Wife, Gomer, Eve, Rachel, any TGT ladies and Ruth. That’s only just a start and it doesn’t take into account that we’re also introducing at least a half dozen quality female characters in The Persecuted Church. That list didn’t even include one of the most commonly played females, my favorite target for “Tempter”, Foreign Wives.

Not every N.T. Lost Soul is going to be a good exchange target for “Escape”. For example, the “Revealer” is a very popular Lost Soul but you need to draw it to benefit from its ability. Another Lost Soul you definitely won’t want to exchange for is “Awake”. 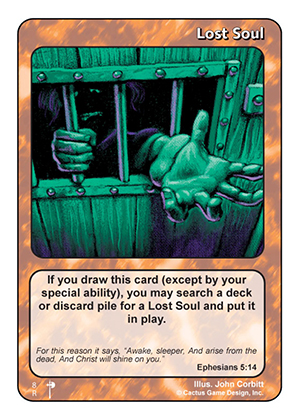 Now we’re back to the type of Soul searching that people are used to, searching the opponent’s deck. “Soul drought” is not fun to play against, which is why cards like “Hopper”, Harvest Time, Fishers of Men and Barnabas have been popular choices.

I’m pretty confident that we will see “Awake” as regularly, if not more so, than all the cards listed above. Not only is it good for Lost Soul generation but it’s also a counter to the commonly used “Hopper” Lost Soul.

It took a few attempts before we found a balance that would allow “Awake” to be strong Lost Soul generation but not encourage super fast decks. In it’s final form, if you load up on draw abilities, you greatly reduce the chance that you’ll get to pull a Lost Soul out of your opponent’s deck.

In the event that your opponent is playing Burial, or gets a lucky discard with Jephthah, you can get that Lost Soul back from the discard pile too.

The Spice of Life

There’s a saying that “variety is the spice of life”. If that’s true then having lots of viable options for special ability Lost Souls when deck building will make the game more fun and dynamic. I’m excited about these three new options. I hope you are too.

One thought on “Awake, Escape and Tempter”