Early on in the process of creating this latest set, it became clear that we needed to ‘spread the wealth’ a bit in terms of the cards printed.  We had created an awesome new type of card, Territory-Class Characters, which had artifact-level effects printed on characters to make them more versatile, useful, and allow us to flesh out themes a lot better and easier.  However, while several evil brigades got their own versions, only clay had thus far received cards in this new category of character.

As a group, we agreed that we needed to print some Territory-Class Heroes in other brigades, and particularly a few for some O.T. themes.  But who to choose?

One person who we settled on was Eleazar, Son of Aaron.  He was the second High Priest of the Tabernacle, taking the mantle from his father when he died.  He was also the patriarch of the House of Eleazar, which was granted a persisting priesthood through God’s covenant.  Essentially, he was an incredibly important piece of establishing the worship of God in the Promised Land, which we will delve into more later, and he deserved an appropriate ability and to be a piece in a greater Tabernacle Priests theme.

So, without further ado, I give you Eleazar, Son of Aaron: 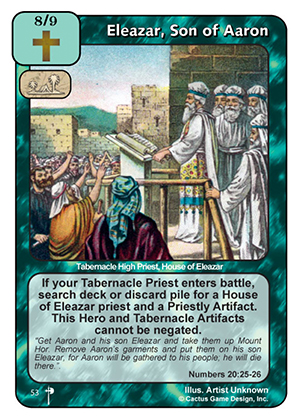 To understand why this ability was chosen, let’s discuss Eleazar’s life and accomplishments, which isn’t possible without understanding his brothers.  He was the third son of Aaron, after Nadab and Abihu.  He was assigned to assist with priestly duties, but the High Priesthood should never have passed to him as the third eldest.  However, his older brothers sinned against God (Leviticus 10).  They went and burned incense, which involved a threefold sin.  First, God had split the labor and tasks very clearly, and the incense offering was a duty that was only to be performed by the High Priest, which was Aaron at the time.  Second, this was a holy task only to be performed by the singular High Priest, and they went as two to perform a duty to only be completed by one.  Finally, and perhaps worst of all, it is implied that they burned the incense themselves.  While this may seem odd without knowing the history, the fire for the incense offering came from God; to burn the incense themselves made it ‘strange’ to God, and showed their lack of faith.

They were killed for their sins, because God demanded much of those who were to administer the rites and rituals, and he had made clear what was to happen and how it was to happen.  We have to remember that these priests were responsible for performing the sacrifices that cleansed the people of their sins, and without pure priests this could not happen.  We are blessed in our time that Jesus, as the High Priest that was promised, already gave the sacrifice that covers all of our sins; at the time of the Tabernacle, a failure by the High Priest meant insufficiency in the atonement of the people.  Truly, there was great responsibility required of these men, hence why Nadab and Abihu were consumed by God’s fire.

We recap this chapter of Eleazar’s life for good reason.  He just lost both of his older brothers, and then Moses tells him and his father and living brother that they cannot mourn, because the punishment was just and they had to show that to the people.  Unimaginable to think what he must have felt at that time, and he and his surviving family neglected to eat the sin offering as prescribed as a result.  The reason is that the eating by the priests was to be done joyfully, in thanksgiving to God, and Aaron’s response to Moses in Leviticus 10:19 essentially says that their joy would have been insufficient for God, given what had happened.

But this grief came with a powerful lesson that must have shaped him as a priest and prepared him for his father’s mantle, for he was careful to follow the laws and regulations of worship as God commanded.  When the Israelites entered Canaan under Joshua, Eleazar as the High Priest performed his task of distributing land and spoils.  He resolved disputes and performed the duties that atoned for the sins of the people.  He raised his son, Phinehas, with the proper zeal for the Lord and respect for God’s commandments, so much so that God granted his descendents, the House of Eleazar, a covenant of perpetual priesthood for Phinehas’ faith and zeal (Numbers 25:12-13).  When we contrast this with other priests, such as Eli, we can see that even raising his children properly was a great accomplishment.

And this all leads us to his ability.

As described above, the House of Eleazar was granted a perpetual priesthood, which lasted until the time of Eli but was restored as prophesied by King Solomon.  He searches out the priests that are promised (those from deck) and ensures that you cannot extinguish his line (those in discard), as God’s promise cannot be undone.

He was also only the second High Priest to wear the mantle, and the artifacts of the priesthood were under his care and consolidated in the care of one High Priest during his tenure.  He ensures that these artifacts are used as prescribed by God, and so he can pull them from deck or discard.

Lastly, Eleazar was the second Tabernacle High Priest, and his legacy is one related to the Tabernacle.  During the Exodus, he was tasked with the maintenance of holy objects, carrying the oil for the lampstand, the incense, the grain offering, and the anointing oil; “the responsibility of all the tabernacle and of all that is in it, with the sanctuary and its furnishings” (Numbers 4:16).  Therefore, he ensures that the Artifacts held therein remain in working order, and they cannot be negated.

Now, some people will see the ability above and note that Priestly Artifact is not a current term in Redemption.  This is correct, it is a brand new term that will be introduced with the new set, and expanded as we introduce more to the Tabernacle Priest theme over time.  Here is the definition:

Priestly Artifacts include Artifacts used by priests that are not designated as Tabernacle/Temple Artifacts:

Many have often wondered why these were not included as Tabernacle or Temple artifacts, but the fact is that each of these items was not meant to be held in those locations alone, but to be worn and/or used by the High Priest.  Thus, Priestly Artifacts will be the new term used to reference them, and we are excited to work on this concept further in later sets, which will only expand on Eleazar’s role in that theme as it develops.

One thought on “Eleazar, Son of Aaron”